Henri Fantin-Latour (1846-1904) was a French Impressionist painter and lithographer. He was a student of the École des Beaux-Arts in Paris and was influenced by the symbolist movement.

Although he created some ingenious lithographs, Henri Fantin-Latour is best known for his portraits of Parisian friends, who all belonged to new movements of the French artistic and intellectual elite.

In this article, you can read about and see two of Henri Fantin-Latour's famous Impressionist portraits:

Go to the next page to learn more about Impressionism, Henri Fantin-Latour, and Edouard Manet. For more on Impressionist paintings, artists, and art history, see: 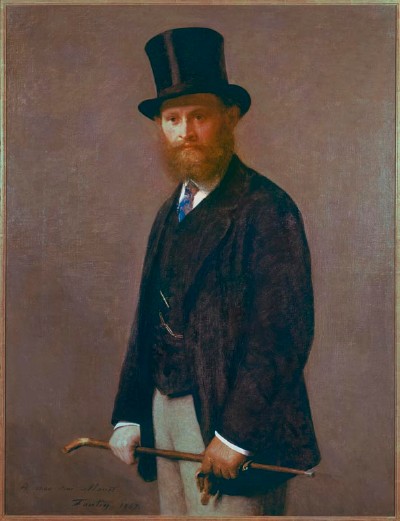 Henri Fantin-Latour's Portrait of Edouard Manet is an oil on canvas (46-1/4 x 35-1/2 inches) that belongs to The Art Institute of Chicago.

Henri Fantin-Latour conceived his Portrait of Edouard Manet (1867) to present the artist as a respectable man of his times. Impeccably dressed and with a reserved demeanor, this depiction of Edouard Manet countered the wide-spread perception of him as a renegade that had been promoted in the conservative art press. In fact, Manet never regarded himself as a revolutionary -- it was his choice to pose as a bourgeois gentleman -- but he insisted that his art reflect the image and interests of his own society.

Henri Fantin-Latour was not the only young Impressionist artist to be inspired by and in awe of Manet's genius, which is evident in the group of people portrayed in his painting A Studio in Batignolles Quarter. Go to the next page to learn about this work.

A Studio in Batignolles Quarter by Henri Fantin-Latour 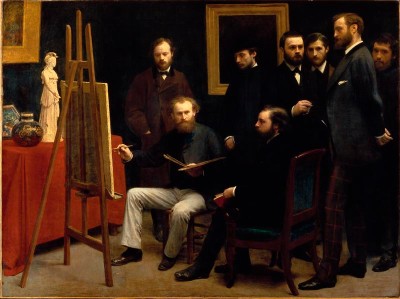 In his group portrait, A Studio in Batignolles Quarter (1870), Henri Fantin-Latour honored Manet's influence on a new generation of artists. Edouard Manet, seated at his easel, is painting a portrait of the artist and critic Zacharie Astruc. The tall figure standing behind Astruc's chair is Frederic Bazille; Claude Monet can be seen at the far right behind him. Pierre-Auguste Renoir stands in the center, and the critic Émile Zola is to his immediate left.