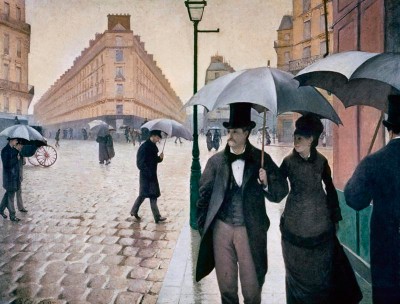 Gustave Caillebotte's Paris Street; Rainy Day is an oil on canvas (83-1/2 x 108-3/4 inches), which is owned by The Art Institute of Chicago.

In Paris Street; Rainy Day (1877), Gustave Caillebotte caught the temperament of modern-day Paris. The broad span of the boulevards, the impressive forms of the apartment blocks, and the elegant composure of the figures appear as urban icons. The effect of the misting rain on a gray day has the credible force of first-hand observation. Critic Émile Zola admired the epic scale of this Impressionist painting and predicted that Gustave Caillebotte would prove to be the boldest innovator in the group.

Gustave Caillebotte also painted the leisurely side of modern life. This next Impressionist painting, Boating on the Yerre, is full of dynamics in spite of its relaxed subject.