The Models by Georges Seurat 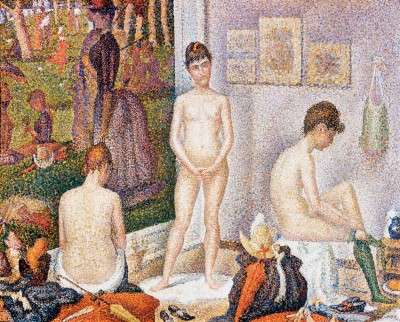 In works such as the 1886-1887 painting The Models, Georges Seurat continued to experiment with his optical color theories. In a small but luminous canvas depicting models in his studio, Seurat varied his application of dabbed pigment from the loose spray of contrasting pinks and blues that color the walls to the more dense and nuanced treatment of the women's flesh. The canvas of Sunday Afternoon on the Island of the Grande-Jatte pinned to the wall behind them presents a contrast in tonality from that of The Models, which Georges Seurat believed expressed differences in mood.

Though Georges Seurat was pioneering new approaches to art, he still shared an interest in traditional Impressionist subject matter. Next, we'll look at a painting of a subject that was quite popular with the Impressionists.