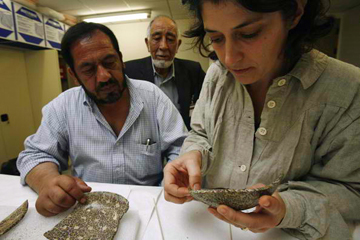 Glass has been a staple in the arts since about 3000 B.C. By 2500, business was booming for glass makers and by 1400 B.C., they'd discovered a new trick. Referred to as mosaic glass, the first millefiori pieces were rudimentary: long slender rods of hot glass rolled into the surface of existing vessels [source: Phillips].

As the art evolved, the work became increasingly intricate, incorporating multiple layers of glass in myriad colors and shapes. Artisans eventually started slicing off rounds of rods, fusing them together and using them to create decorative vessels and mosaic wall hangings.

Bitter battles around 1300 B.C., however, would bring a 500-year dearth in the Egyptian arts. But once the civil unrest was sorted out, the arts -- including glassmaking -- experienced a resurgence in both Egypt and Alexandria for several centuries [source: Phillips].

However, glass blowing, believed to be invented in the first century B.C., changed things. It was easier and faster, meaning glass could be mass produced, unlike the laborious millefiori.

Millefiori fell out of favor but managed to make a comeback around the 8th and 9th century in the Islamic world. This is remarkable since the technique was "reinvented" through experimentation in an attempt to replicate Roman pieces [source: Carboni and Adamjee].

The technique came and went through the centuries. It wasn't until the 19th century that millefiori found its most famous form. Read on to find out the skinny on the great paperweight wars.