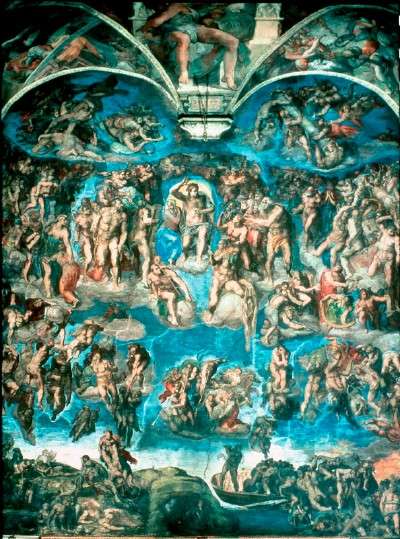 Last Judgment by Michelangelo was a controversial but important fresco (48 x 44 feet) that can be seen in the Sistine Chapel, Vatican. See more pictures of works by Michelangelo.

Michelangelo created no paintings between the completion of the Sistine Chapel ceiling in 1512 and the beginning of his painting Last Judgment in 1536. Commissioned by Pope Paul III, Last Judgment (1536-41) marked a change in style for the artist. His palette grew more monochromatic, and the proportions of his figures grew broader and more menacing. The piece, seething with nudity and brutality, was criticized because the massive and contorted figures, which were placed behind the altar of the Chapel, were shockingly naked and thus thought indecent.

An older and more thoughtful Michelangelo originally accepted the commission for this important painting from Pope Clement VII. The original subject of the mural was the resurrection, but with the Pope's death, his successor, Pope Paul III, felt the Last Judgment was a more fitting subject for 1530s Rome and the judgmental impulses of the Counter-Reformation.

While traditional medieval last judgments showed figures dressed according to their social positions, Michelangelo created a new standard. His groundbreaking concept of the event shows figures equalized in their nudity, stripped bare of rank. The artist portrayed the separation of the blessed and the damned by showing the saved ascending on the left and the damned descending on the right. The fresco is more monochromatic than the ceiling frescoes and is dominated by the tones of flesh and sky. The cleaning and restoration of the fresco, however, revealed a greater chromatic range than previously apparent. Orange, green, yellow, and blue are scattered throughout, animating and unifying the complex scene.

Follow the links below to see and learn about some of the most striking and important scenes from this powerful work, Michelangelo's Last Judgment.

On the next page, see Christ as Michelangelo chose to show him on the last day.

Christ Within the Last Judgment 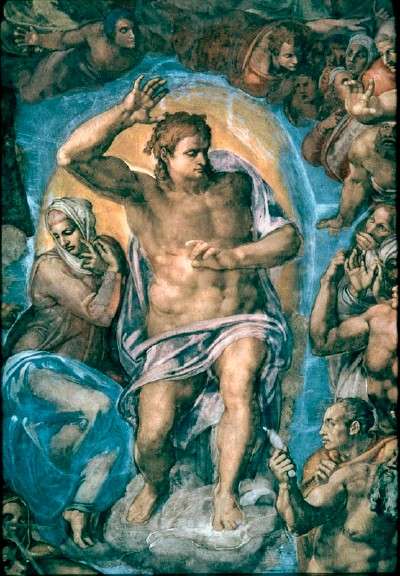 The powerful Christ of Michelangelo's Last Judgment (fresco 48 x 44 feet) can be seen in the Sistine Chapel, Vatican.

In Michelangelo's Last Judgment (1536-41), a figure of broad, powerful proportions, Christ appears in a radiant glow of divine light. Positioned in the section of the fresco best lit by the Chapel's windows, Christ is seen in a rare bare-legged portrayal, wearing only a mantle across his loins in a manner that reveals the wounds of his crucifixion and that echoes images of his resurrection.

Go to the next page to explore the figure sitting by Christ's left foot, St. Bartholomew. 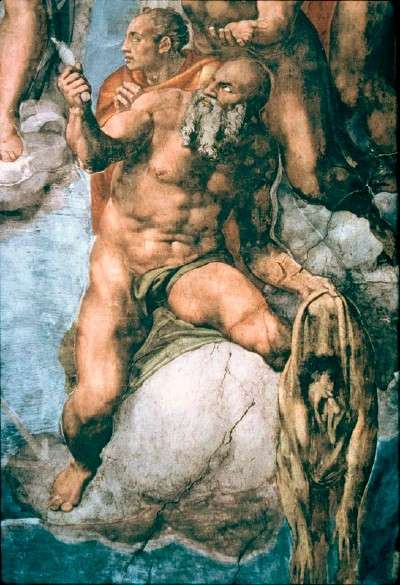 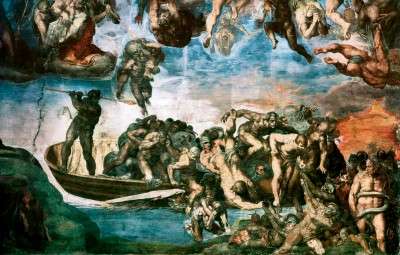 Charon Within the Last Judgment 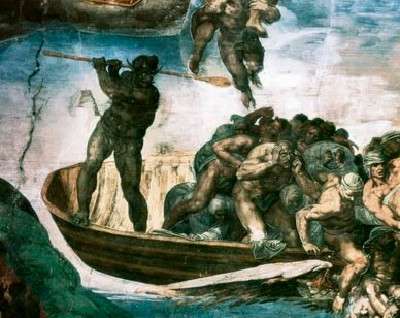 Charon is a detail from Michelangelo's Last Judgment (fresco 48 x 44 feet) within the Sistine Chapel, Vatican.

Michelangelo borrowed from the poet Dante by including Charon, gatekeeper of the river Styx, in his Last Judgment (1536-41) portrayal of hell. This hideous embodiment of evil herds the darkly gaunt and tortured souls as they spill upon the shores of hell. In his rendering of this figure, Michelangelo effectively brought to life Dante's "Charon, the demon, with eyes like embers."

Charon took the condemned souls to Hell's Mouth. Go to the next page to learn more about Michelangelo's version of hell.

Hell's Mouth Within the Last Judgment 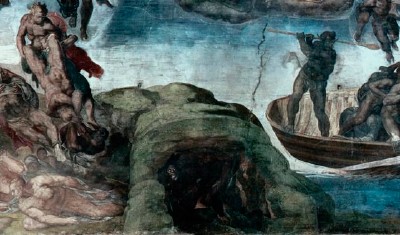 In his Last Judgment (1536-41), Michelangelo reserved the space above the altar for his terrifying depiction of Hell's Mouth. Given his views on the corruption of the papacy, it is easy to imagine that he chose to remind church leaders that they are as culpable in their sin as the rest of humankind. Still, the artist is implicit in his illustration of doom, painting only an ominous glow, no flames, and focusing on the intangible but ultimately more painful inner hell of each of the damned. Their tortured movements, contrasted with the glorious freedom of the figures of the select, hold a horrifying appeal.

From hell's horrors to some of the beauty of Michelangelo's divine scenery: his angels. Go to the next page to see details of the angels of the Last Judgment. 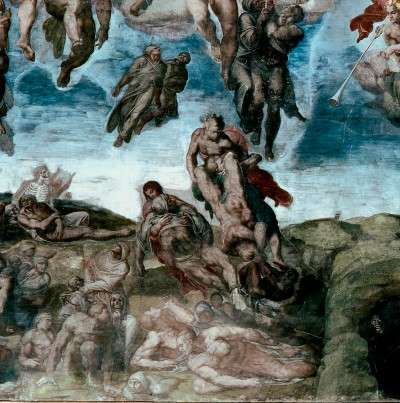