Michelangelo di Lodovico Buonarroti Simoni (1475-1564) was perhaps more a sculptor at heart than he was a painter, and thus Vasari quoted him saying, "I cannot live under pressures from patrons, let alone paint."

It seems impossible that the artist responsible for the grand and glorious frescoes on the Sistine Chapel walls and ceiling often declared that he was not a painter. Imagine the wealth of talent an artist must possess to create such vivid and triumphant work. And consider that Michelangelo was working against his own will and under the weight of self-doubt -- only then can one truly begin to appreciate the unparalleled genius of Michelangelo, the painter.

Describing himself as first and foremost a sculptor, Michelangelo often expressed regret that he had not dedicated his life fully to the art of sculpture. He even signed his letters and contracts "Michelangelo, the Sculptor."

The artist's dislike for painting is plainly illustrated in the fact that he found it to be opposed to his chosen art form. Even in his seventies, Michelangelo suggested to Benedetto Varchi, in response to Varchi's study of the relative merits of painting and sculpture, that "painting seems to me more to be held good the more it approaches sculpture, and sculpture to be held bad the more it approaches painting: and therefore I used to think that sculpture was the lantern to painting, and that between the one and the other was that difference which there is between the sun and the moon."

In spite of his dismissive attitude toward painting, Michelangelo proved to be a gifted painter of sacred art. In fact, he surpassed his contemporaries in expressive intensity and skill to become the reluctant visionary of Italian Renaissance painting.

This article explores some of Michelangelo's paintings, his methods and techniques, and the subjects of his art. Follow the links below to learn more. 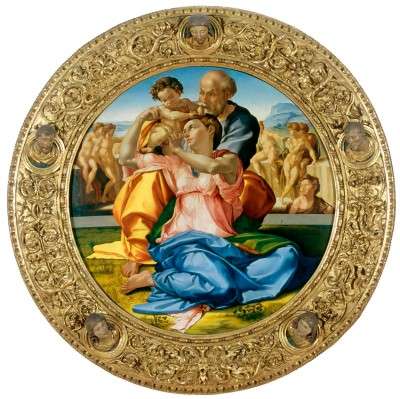 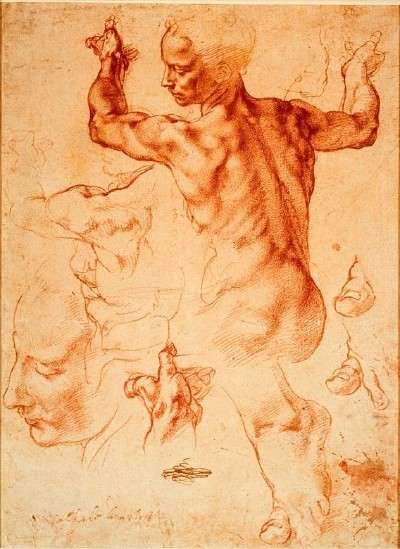 Michelangelo's detail of the Libyan Sibyl is one of the finest on the Sistine ceiling (1508-12). The sibyl is suspended in a dramatically twisted pose, or contrapposto, an effect that the artist repeated with equal brilliance in his 1530 sculpture, Victory.

The Libyan Sibyl, whom Michelangelo gave a regal pose and Hellenic features, was known for her prophecy of the coming of a king born of a virgin.

Libyan Sibyl Study is one of the finest surviving examples of Michelangelo's many drawings for the Sistine ceiling. It demonstrates the artist's careful attention to every detail of the figure. The red chalk drawing, done from a male model, shows a study of the face in the lower left-hand corner, in which the artist transformed the rough male features of his model into the Hellenic ideal of female beauty found in the final painting. 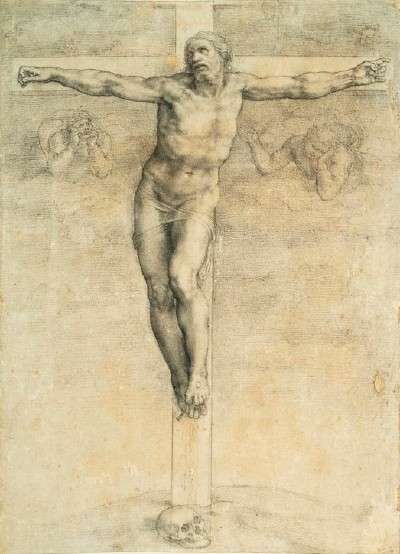 Michelangelo's Crucifixion (c. 1541) is just one of many haunting and highly personal drawings that the artist completed during his last years. These drawings amount to a form of visual prayer expressing his deeply felt beliefs, feelings he was also expressing at the time in his religious poetry. In this drawing, Michelangelo has endowed Christ with the muscular strength typical of his sculptures, while concentrating a sense of deep anguish in Christ's head, which twists upward as if pleading for humanity's redemption.

Michelangelo did many variations on the passion of Christ, which, toward the end of his life, became increasingly endowed with the artist's own feelings of inner turmoil. See Michelangelo's drawing of Christ redeemer on the next page. 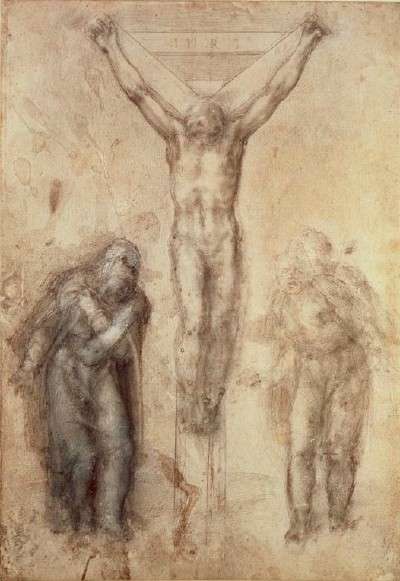 Comic Books Are More Than Just White Guys in Tights
Did the Chinese Invent the Superhero Team?
Claude Monet Paintings 1900-1908