The Inspiration for the Indoor Cloud 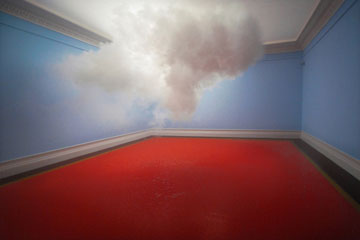 Smilde's clouds are engineered through a painstaking process, building up just the right mixture of moisture and dust to create the environment over hours, so that the ephemeral clouds can be documented through photographs. His first installation, "Nimbus," was set in a simple, bright blue room that evoked a summer sky, with a red floor that underlined the surreal moment. The reference to Magritte's puffy-cloud blue paintings should be obvious, but it's the process that makes it interesting; such a great deal of work goes into creating momentary art which, through documentation, becomes no more or less real than Magritte's paintings -- or the classic Dutch landscapes which also provided inspiration.

Again, you have here the idea of a painted image being brought out of a painting in a museum, only to be installed and photographed in the same museum space as a more interactive level of the art ... which is then restricted back to a simple image once the cloud fades. It's a democratization of the idea of "art" as something to be preserved, into simply equal imagery behind which lies serious effort and craftsmanship, using tools those classic Dutch artists could never imagine. In a way, it's the same train of thought that leads to street artists like Banksy or pop artists like Warhol, although perhaps in the opposite direction.

But Smilde's interest in cloud imagery goes beyond the simple surrealism of that first installation: He is also interested in the more threatening, or portentous symbolism of the cloud as a cartoonish symbol of bad luck. For "Nimbus II," he used a cathedral space and even more evocative and dramatic lighting to create images that bring a negative power to the clever cuteness of the original "Nimbus." The cloud in "Nimbus II" seems almost trapped.