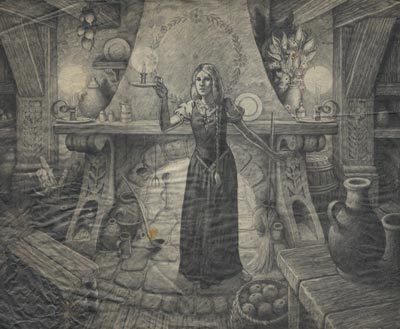 Artists work in all sorts of mediums. If your illustration is going to go onto the comic page of a daily newspaper, then it might be a pen and ink drawing. If it is going in a comic book or the Sunday paper, you would draw it in ink and color it with a computer. Other mediums include charcoal, chalk, pastels and water colors. For the Hildebrandt brothers, the illustrations are almost always done using acrylic paint in a very large format.

The first step to creating a painting is a final sketch, also known as a final layout. These are incredibly intricate pencil drawings, normally the same size as the final painting, that contain all of the details that will go into the finished piece.

To make a sketch like this, the Hildebrandt brothers actually pose real people in costumes and photograph them. The models are lit as they will be in the illustration, because the purpose of these photographs is primarily to understand and recreate the proper pattern of light. Light on a human face or on a piece of fabric is one of the things that can make or break an image that is supposed to be realistic. Tim: "Our method is to create thumbnail sketches, then make costumes and photograph a model in the correct lighting."

The other reason for photographing people is to work out things like facial expressions and gestures. By posing a model naturally, or by letting the model "act out" the emotions in the scene, it is possible to capture on film exactly the right mood. Then the expressions and gestures can be transferred to the image of the characters in the final layout.

Tim points out, "People usually only see the finished product. They don't realize the amount of work that is done before we even start the paintings. We did very elaborate, full-sized pencil drawings for almost all of our Tolkien work. We had to do them this detailed not only for ourselves, but for Ballantine, in order to get their approval and check for inaccuracies."