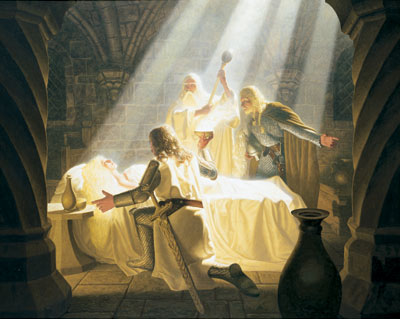 With a commission in hand, one of the very first steps in creating an illustration is deciding on the "style" of the work. In many cases the person offering the commission has some specific ideas about the style. In other cases, style is largely left to the artist's discretion.

In either case, deciding on the artistic style of the art involves an understanding of the audience (the age of the audience, for example) and the message the work should send to that audience. For example, an illustration of a car designed for a four-year-old child would certainly have a different style and approach than an illustration of a car designed for an adult, or one designed for an automobile mechanic. Knowing the audience and setting the style for the work is perhaps the artist's most important decision. This decision affects a great number of things in the final illustration. Getting the style right also has a big impact on audience acceptance.

The Brothers Hildebrandt started their careers making documentary films and then went into illustrating children's books, so early on, they had experience creating for two very different audiences. As they started work on their calendar, the brothers spent a good bit of time at the outset deciding on the overall style. They approached this decision by creating a variety of sketches to demonstrate different possibilities. Since they came from the world of children's book illustration, some of their first illustrations had a childish feeling to them. For example, this sample:

An early conception of the Fellowship of the Ring.
Illustration courtesy Spiderwebart

Greg Hildebrandt notes, "This drawing was one of the first we did on Tolkien. Then we decided to take a more realistic, adult approach for the Ring. For six years Tim and I had illustrated Children's books. The Tolkien calendars were the beginning of a new style for us."

By working through a number of sketches and working back and forth with Ian Summers, the group established the overall look of the art. This picture shows the more mature tone typical for the Tolkien calendars.

This image is the centerfold for the 1976 Tolkien calendar. It is a painting, typically done in a very large format. Some of the Hildebrandt paintings are as large as 6 feet (2 meters) wide. The background, the tree and each character in the scene are exquisitely detailed.

With the commission in hand and the tone established, the actual process of illustration can begin. But first, the illustrators have to work all of those details out.