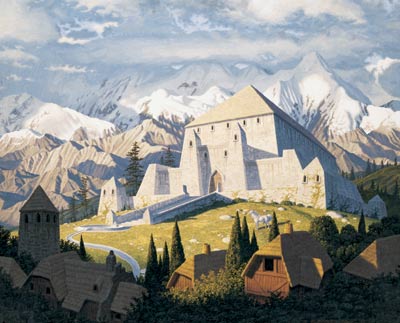 J.R.R. Tolkien created several of the most popular books ever written -- "The Hobbit" and "The Lord of the Rings" trilogy. Those books paint their scenes using words -- text descriptions that are extremely detailed and vivid. Greg and Tim Hildebrandt, as illustrators, have the job of taking those text descriptions and bringing them to life in images. The process that they use to create such detailed paintings is fascinating.

But first, the brothers had to get the gig.

In the case of the J.R.R. Tolkien calendars, the person with the money was Ian Summers, the art director for Ballantine Books. He needed a set of 14 illustrations for the 1976 Tolkien Calendar. Ian describes the scene of his first meeting with the Brothers Hildebrandt in this way:

In the reception area stood a pair of identical twins, bearded, wet (it was a snowy day in February), with paint-covered jeans, thick eyeglasses, and a kind of endearing attitude. I searched for their portfolios. There were only two dark-green plastic garbage bags in the corner, seemingly left behind by the night crew.

I suggested that they come back when they had their portfolios with them and to make an appointment. One of them said, "Hey, man. Pictures. Tolkien pictures. We make 'em."


Each reached for a garbage bag and emptied it onto the reception room floor. Greg was on his knees smoothing out crumpled pieces of vellum with exquisite pencil drawings based on "The Lord of the Rings." I was enthralled. One might say my jaw dropped. I had been searching for unique artists to create the Tolkien calendars. I knew I had found them... Within a week, papers were signed and I had commissioned the brothers to create fourteen paintings."

In the world of illustration, this probably ranks as one of the least orthodox methods for getting a commission, but it worked in this case. The Hildebrandt brothers got a contract and they started to create their illustrations.