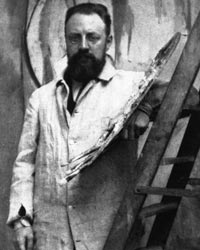 Henri Emile Benoît Matisse was born in a two-room cottage with a dirt floor in the French town of Le Cateau-Cambrésis on Dec. 31, 1869. The family moved to the town of Bohain when Matisse was just 8 days old. His father was a grain merchant who owned a general store, and his mother was an amateur artist who painted on ceramics and made hats [source: Morgan]. Matisse's father was a stern, practical, no-nonsense man who expected his son to go into business, and the town of Bohain was filled with similar-minded, industrious, hard-working people, many of whom manufactured textiles or grew sugar beets. Hardly the scenic village one might imagine nurturing a budding artist, Bohain was filled with smoking chimneys; textile dyes polluted the streams, and the streets often reeked of beet pulp [source: Spurling].

After going to Paris in 1887 to study law, Matisse passed the bar with distinction in 1888. His father got him a clerking position at a law office, but Matisse had little interest in his work, which he found so boring he sometimes entertained himself by pelting passersby with bits of paper from a peashooter.

He continued a lifelong pattern of dutifully doing what others expected of him until he was 20 years old and hospitalized with digestive problems. His mother brought him a box of paints to occupy his time, and Matisse had an epiphany: "From the moment I held the box of colors in my hand, I knew this was my life." Matisse bought a do-it-yourself painting handbook and enrolled in art classes without his father's knowledge [source: Spurling]. He studied art at the Académie Julian in Paris under Adolphe William Bouguereau until 1892, when he left to study under Gustave Moreau at the École des Beaux-Arts until 1897 [source: Encyclopedia of World Biography].

Matisse had a daughter, Marguerite, with his lover Caroline Joblaud in 1894, but he would marry Amélie Noellie Parayre in January 1898. Amélie loyally supported Matisse during more than 40 years of marriage until their separation in 1939. They had two sons together, Jean (born in 1899) and Pierre (born in 1900). Matisse was diagnosed with duodenal cancer in 1941 and was permanently confined to a wheelchair after that. He died of a heart attack on Nov. 3, 1954, at age 84.