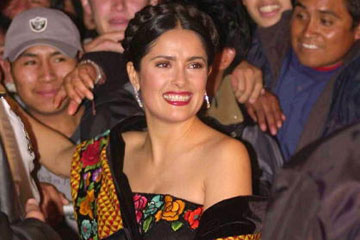 Next to Pablo Picasso and Andy Warhol, perhaps the most famous and recognizable 20th century Modern artist was a diminutive, seriously disabled Mexican woman whose own dark, brooding visage, crowned by a single, feral-looking eyebrow, was frequently the subject of her paintings.

Magdalena Carmen Frida Kahlo y Calderón, known to the world as Frida Kahlo, lived just 47 years, from 1907 to 1954, and spent much of it in excruciating pain, both from polio and the effects of a 1925 bus accident. Her injuries necessitated dozens of operations on her back, leg and foot, and forced her to spend months at a time in bed, confined in a body cast. But those extreme physical problems didn't prevent her from making art. To the contrary, Kahlo used her physical and emotional torment as raw material for her paintings, which fused elements of the European Realist, Symbolist and Surrealist movements with the vibrant colors and exotic style of indigenous Mexican art [source: Arizona State University].

Though Kahlo attracted relatively little attention or acclaim during her short lifetime, in the decades since her death, she has become an iconic artist. Her work is so prized by museums and collectors that her 1943 painting "Roots" fetched $5.6 million at Sotheby's in 2006 [source: Artknowledgenews.com]. Her now instantly recognizable face appears on T-shirts and coffee mugs, and "Fridamaniacs," as the critic Stephanie Mencimer has labeled them, have created more than 65,000 Web sites devoted to her work [source: PBS]. Selma Hayek portrayed her in a 2002 biopic that made $25 million at the box office and became the most successful art-related movie ever made [source: Puente]. In 2001, she became the first Hispanic woman to be depicted on a U.S. stamp.

How and why has Frida Kahlo become such an object of widespread fascination? In this article, we'll discuss the innovative style, disturbingly provocative imagery and dark, irony-drenched humor that makes her work so compelling. But first, let's look at her life story, which was as colorful and tempestuous as her art.

One of Frida Kahlo's characteristic quirks was that she claimed to be born in 1910, the year of the Mexican Revolution. She actually was born in 1907 in Coyoacán, near Mexico City. Her father Guillermo Kahlo was a Hungarian immigrant, and her mother, Matilda Calderon, was of mixed indigenous and Spanish descent.

Guillermo Kahlo was a photographer, and as a child, Frida got her first exposure to the visual arts by accompanying her father on assignments and to his studio [sources: Zamora, Arizona State University]. She was one of the first girls allowed to enroll in the prestigious Preparatory Academy of Mexico City, where she fell in with a bohemian student group, the Cachuchas, and showed an early flamboyance by dressing in men's suits. She studied composition and drawing, but her real ambition was to be a doctor [source: Kettenmann].

However at age 18, a bus she was riding in collided with a streetcar, impaling her body and breaking her pelvis and spine. She spent months in bed, unable to move much at all. To take her mind off the pain and boredom, she began to paint, using a special easel that allowed her to work lying down. The hospital equipped her bed with a mirror attached to a canopy, which enabled her to serve as her own model. That sparked her line of self-portraits, which are the most distinctive part of her work. As she later explained, "I paint myself because I am so often alone and because I am the subject I know best" [source: Kettenmann].

Kahlo's brush with death, and the pain and bedridden loneliness that followed, influenced her art. Another influence was her subsequent marriage at age 22 to muralist Diego Rivera, who was 20 years her senior. She'd met him as a student. The two strong-willed artists had a passionate but tempestuous relationship, made even more difficult by the numerous affairs each of them had. (One such dalliance was Kahlo's affair with Communist revolutionary Leon Trotsky.) They divorced in 1939, only to remarry the following year. "I suffered two grave accidents in my life," she once said. "One in which a streetcar knocked me down […] the other accident is Diego" [source: PBS].

In her lifetime, the uniqueness of Frida Kahlo's art was recognized only by a select few -- primarily she and her husband's artist and intellectual acquaintances. Luminaries who ranged from Josephine Baker to Edward G. Robinson paid visits to the home she kept for Rivera [source: PBS].

But who's to say whether they knew what to make of the puzzling, disturbing images in her paintings -- such as her 1946 painting "The Wounded Deer," in which she portrays herself as a stag running through the forest, bleeding from a fusillade of arrows. Another self portrait, "My Birth," which was painted in 1932, depicts her bloody head emerging from her mother's birth canal, and there's a look of horror on her face. Another painting from the same year, "Self-Portrait on the Border Line Between Mexico and the United States," portrays the U.S. as a gray, unnatural wasteland of smokestacks, juxtaposed with the vivid natural landscape of the Mexican desert. In other paintings, her husband Diego Garcia appears as a Cyclops growing out of Kahlo's brow while she weeps [source: PBS].

Kahlo's fantastic, sometimes grisly images led the Surrealist poet Andre Breton to ask whether she, too, was a member of the same intellectual movement, which sought to jettison rational thought and tap into the subconscious [source: PBS]. Diego Garcia, in contrast, saw her as a realist --"the first woman in the history of art to treat, with absolute and uncompromising honesty, one might even say cruelty, those general and specific themes which exclusively affect women" [source: Kettenmann]

Kahlo herself saw her work as both self-exploration and commentary about the world. "Since my subjects have always been my sensations, my states of mind and the profound reactions that life has been producing in me, I have frequently objectified all this in figures of myself, which was the most sincere and real thing that I could do in order to express what I felt inside and outside of myself" [source: PBS].

After her death in 1954, Kahlo's work languished in obscurity for decades until it was rediscovered by Mexican and Mexican-American artists and aficionados in the late 1970s. Since then, she has not only become phenomenon of fine art but also of pop culture. In part, it's because of the intensity of her visions and her ingenious mashup of modern and indigenous art genres, but also because people find her tragic life story inspiring. As Kahlo biographer Hayden Herrera sees it, Kahlo admirers "get from her this idea that you can just keep struggling and keep working and deal with adversity and keep on going and come up with something that makes life, a whole life, seem worthwhile" [source: Herrera].

So, What's With the Eyebrow?

In his book, "The Naked Woman: A Study of the Female Body," Desmond Morris observes that, traditionally, women born with one continuous eyebrow will zealously pluck and trim it because we tend to think of heavy brows as feral and masculine. (They may also want to avoid being impaled with stakes in their sleep, since superstition holds that a unibrow is one of the signs of vampirism.) "To retain the sinister unibrow, a woman would have to be above fashion," Morris writes. That woman was Frida Kahlo, who wasn't any more ashamed of her facial hair than she was of her infirm body. She made the single brow into a trademark detail of her self-portraits, in a calculated effort to tweak viewers' assumptions about femininity and beauty [source: Morris].