The Loom by Vincent van Gogh 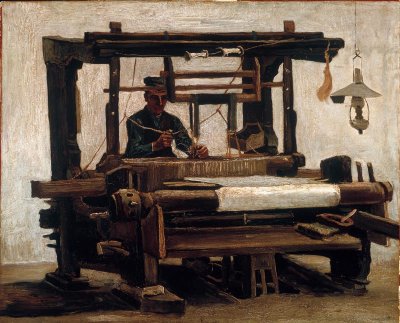 Vincent van Gogh’s The Loom is an oil on canvas (27-1/2x33-1/2 inches) housed in the Kröller-Müller Museum in Otterlo, Netherlands.

Vincent van Gogh completed The Loom in 1884. The confining structure of the large loom displays the weaver fully absorbed in his task, reflecting a parallel intensity van Gogh sensed in his own endeavors.

Living in Drenthe, Netherlands, Vincent quickly ran through his limited resources for art supplies. Early in the new year, he moved to Nuenen, where his father had relocated the family to a new parsonage. He sought his subjects, such as this weaver, whom he paid a small fee to pose, among the working poor.

Many of van Gogh's paintings were explorations of landscapes. Lane of Poplars at Sunset is an early example. Learn about it in the next section.