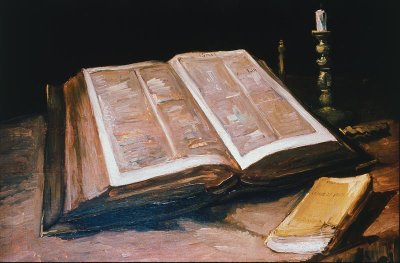 Vincent van Gogh’s Still Life with Bible is an oil on canvas (25-1/2x33-3/4 inches) housed in the Van Gogh Museum in Amsterdam.

In his quest to become a painter, van Gogh arranged still lifes in the studio to train his eye and hand. He was following the tradition of his own heritage, admiring the compositions of the past masters of Holland that featured either the bounty of the merchant's import trade or the basic elements of a rustic repast. In this painting, van Gogh featured deeply personal objects: the Bible of his father's religious traditions and a contemporary novel by Émile Zola.

Van Gogh believed natural light could not be recreated indoors, leading him to often set up his easel outside. For an example of a painting created like this, observe Sheaves of Wheat in the next section.