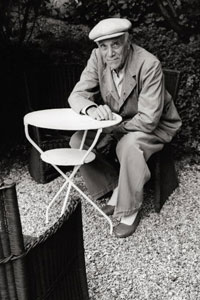 Georges Braque, along with Picasso, helped usher in the Cubist movement. He's pictured here much later, in 1957.
Imagno/Getty Images

The two most influential contributors to the Cubist movement were Pablo Picasso and Georges Braque, who are also considered its founders. However, since their lives were so intertwined in the Paris art scene, determining which one actually founded the movement is up for debate.

I no longer believe in anything. Objects don't exist for me except in so far as a rapport exists between them or between them and myself. When one attains this harmony, one reaches a sort of intellectual non-existence -- what I can only describe as a state of peace -- which makes everything possible and right. Life then becomes a perpetual revelation. That is true poetry.

Georges Braque, born in the village of Argenteuil, France, came from a line of artists. After flunking out of art school in 1899, he became a painter's apprentice. His early works were influenced in large part by the Fauves and Henri Matisse. In 1907, he first experienced the work of Cezanne, met Picasso, and began painting the landscapes that would name him a founder of the Cubist movement. Some of his most famous Cubist works include "Large Nude" (1908), "Houses at L'Estaque" (1908), "Violin and Pitcher" (1910) and "Man With a Guitar" (1911)

After being wounded in World War I, Braque began moving away from the Cubist aesthetic, eventually producing works like "Still Life" (1932) and "Les Oiseaux" (1953).

In Cubism, in the end what was important is what one wanted to do, the intention one had. And that one cannot paint.

Spanish-born artist Pablo Picasso is probably the most famous artist of the 20th century, and one of the few in history to be a household name during his own time. After studying art in Barcelona, he moved to Paris in 1904, where he became a central figure in the burgeoning art scene.

His work went through several well-known, well-studied phases, including the Blue Period (1901-1904), the Rose Period (1904-1906) and, beginning in 1907, Cubism. His "Les Demoiselles d'Avignon" is considered by many to have initiated the Cubist movement, although writer and art aficionado Gertrude Stein called his 1909 work at Horta de San Joan in southern Spain (such as "Reservoir at Horta de Ebro") the first true Cubist artworks [source: MOMA].

The Cubist movement, while typically associated with paintings, was not limited to a single medium. Sculptors Alexander Archipenko, Raymond Duchamp-Villon and Jacques Lipchitz, as well as architect Le Corbusier (formally Charles-Édouard Jeanneret-Gris) reveal the influence of Cubism beyond the painting realm. Cubist style shaped art until World War II. Even as it faded from prominence, it influenced works of Surrealism and Pop Art, and it continues to influence contemporary art to this day.

For more information on Cubism, Picasso and related topics, look over the links below.