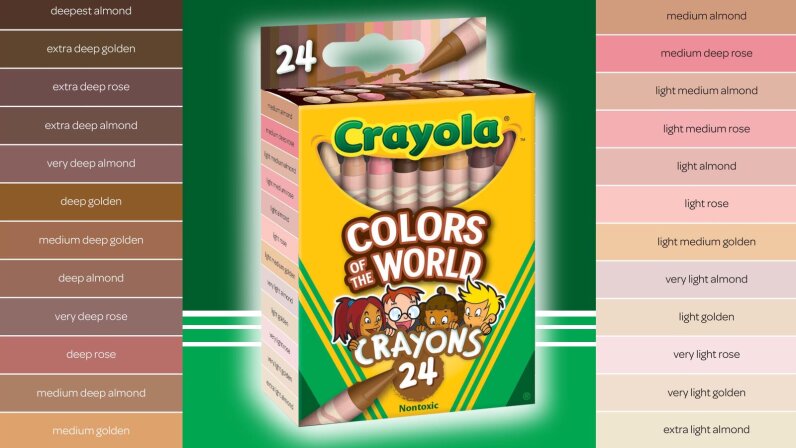 Crayola's new 'Colors of the World' includes 24 different skin tone shades designed to celebrate the diversity around the world. Crayola

Crayola doesn't want any kid to ever struggle to draw a realistic self-portrait because they can't find their skin tone in the crayon box. That's why the famed crayon company is releasing the Colors of the World crayons, which includes 24 new "specially formulated" colors designed to mirror and represent more than 40 skin tones in hopes of cultivating a more inclusive world, according to a company press release.

Taking a cue from makeup companies, which have been taking skin tone into consideration for a while, Crayola teamed up with cosmetics expert Victor Casale, to help create the new shades. Casale is the former chief chemist and managing director of research and development at MAC cosmetics and cofounder and chief innovation office of Cover FX. He is currently CEO of MOB Beauty.

The new crayons, which come in 24- and 32-count packs, will be available for sale in July. The 24-count pack includes all hues in the global shade palette, while the larger pack has eight additional crayons for hair and eye colors. Hues listed on the gradient skin tone labels in English, Spanish and French have names like extra deep almond, deep rose, medium golden, extra light almond and light medium rose.

Crayola and Casale devoted more than eight months to get the Colors of the World shades just right, using the same scientific process he uses to create accurate colors for foundation makeup.

"I have spent my life trying to create truly global shade palettes because I know what it's like to be with a person who has finally found their exact match," Casale said in the press statement. "Growing up, I remember mixing the pink and dark brown crayons to try and make my shade, so I was thrilled when Crayola asked for my help to create the Colors of the World crayons."

Crayons have come a long way in recognizing diversity. In Crayola's original 1958 box of 64, a crayon was named "flesh" but was changed to peach in 1962. In 1992, the brand launched its multicultural product platform in response to consumer and educator feedback it received. At that time, the colors were chosen from the brand's standard selection to represent skin tones of the world, and black and white crayons were included for blending, according to the Crayola website.

Future children may have to contend with pandemics, climate change and limited resources, but at least one small, yet important, problem has been solved.