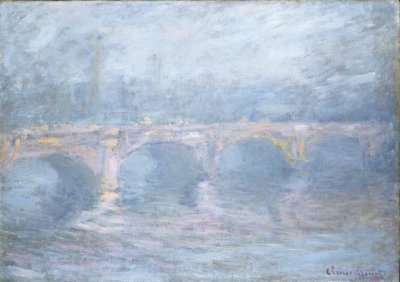 Waterloo Bridge, London, at Sunset by Claude Monet is an oil on canvas (25-3/4 x 36-1/2 inches) and housed at the National Gallery of Art, Washington, D.C.

The hours Claude Monet spent viewing his water garden transformed his idea of a series and his approach to a single subject. Where before he recorded the salient changes caused by the seasons and the times of day, Monet now honed his observations to perceive the most subtle variation of light and surface activity, which he rendered through color harmonies and articulate brush strokes. Time became irrelevant; tone and atmosphere alone riveted his attention, as seen in the 1904 painting, Waterloo Bridge, London, at Sunset.