The Houses of Parliament (Effect of Fog) by Claude Monet 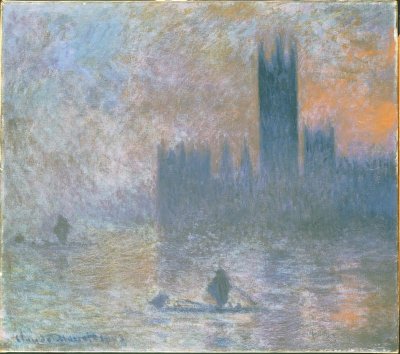 Claude Monet’s The Houses of Parliament (Effect of Fog) is an oil on canvas (32 x 36-3/8 inches) and is housed at The Metropolitan Museum of Art, New York.

Illness cut short Claude Monet's third London campaign. He returned home to Giverny and felt compelled to finish his canvases in the studio, including The Houses of Parliament (Effect of Fog) in 1903. Although he had done this with his Japanese bridge series, his water garden was only steps away. London was now distant, and he had no opportunity to refresh his observation, so he was forced to work from memory. Monet found this frustrating, but, by 1904, he declared the three series -- including nearly 100 canvases -- complete to his satisfaction.

Water Lilies by Claude Monet (1903) is the first of Monet's next series, featuring two motifs that intrigued Monet: water and the action of light on its surface. Click to the next section to see Monet's Water Lilies.