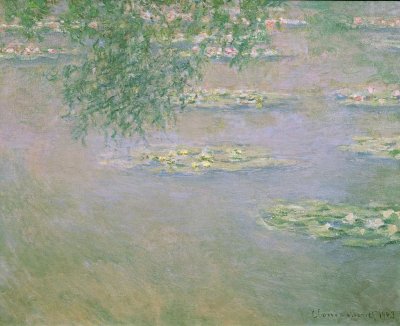 In this article, you will learn about Claude Monet’s from 1900-1908, including Water Lilies, pictured above. See more pictures of paintings by Monet.

When Claude Monet traveled to London to visit his son Michel in the autumn of 1899, the sight of the city's buildings looming in the fog inspired him to return the following year.

The challenge of painting London's muted colors and moisture-laden atmosphere had intrigued him during his earlier visit in 1870, and now his desire to paint these distinctive effects of light and tonal nuance was rekindled. He painted boats on the Thames from a position on the Charing Cross Bridge as well as the massive silhouette of the Houses of Parliament in every conceivable weather condition. He struggled to capture what he saw, working on as many as 15 canvases at a time.

In 1900, Claude Monet pushed himself to the point of collapse, and, in the following year, a severe bout of pleurisy forced him to cut his work short and return to Giverny. He was now more than 60 years old, but he continued to drive himself to the limits of his physical endurance.

During his convalescence in Giverny, Monet formulated plans to change his water garden. The pond was small, and when the lilies were in full bloom they covered the water, reducing the potential for surface reflection. In May 1901, he bought the strip of meadowland between his garden and the Ru River. Working with engineering consultants over the summer, he created a plan to triple the pond's surface.

For the next six years, Monet painted the water lilies floating on his pond. Every summer he followed a rigorous routine. He rose at dawn and set up his easel at the water's edge to catch the first glimmer of morning light. As the sun rose, he took shelter under a large white parasol, working into the early afternoon with only a brief break for lunch. Around three in the afternoon, Monet rested for a few hours. He often returned to the pond after the lilies had closed to observe them in the waning evening light.

Monet ended his work on the series in September 1908 and agreed to let Durand-Ruel exhibit the whole series the following spring in his Paris gallery. After a brief sojourn in Venice with Alice, Monet put his finishing touches on the canvases. In the past, he had allowed Durand-Ruel to organize his work, but this time he had specific demands for the installation. He wanted the works arranged in the order in which they were painted to simulate his experience of painting them.

Every one of the 48 works bore the same name, Water Lilies; the differences were articulated through tone, color, and format rather than content. Durand-Ruel proposed that they call the exhibition Reflections, but Monet insisted upon Les Nympheas: Series des paysages d'eau (The Water Lilies: Landscapes of Water).

In the first exhibition of the Impressionists, Monet had dared to present a new mode of landscape based on visual sensation rather than topographical description. Now 35 years later, he again broke with convention by painting landscapes of water that floated freely across the plane of his canvas, flowing edge to edge, unbounded by the limits of surrounding terrain.