The Break-up of the Ice by Claude Monet 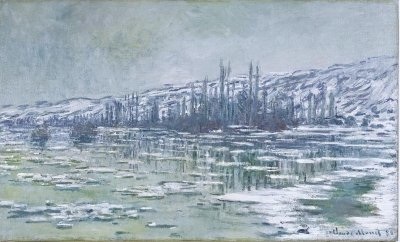 The Break-up of the Ice was completed by Claude Monet in 1880. The winter of 1879 was unusually harsh, and even Monet found working outdoors nearly unbearable. In early December, a sudden rise is temperature caused the ice to crack.

Alice Hoschedé, now living with her children in Monet's house, described the resulting thaw as terrifying, as half the melted snow slid down from the hills onto the village. Monet drew inspiration from the experience, painting scene after scene as the ice floes broke on the river.

Claude Monet also captured the essence of a more colorful summer season. See his painting The Artist's Garden at Vétheuil in the next section.