Bridge at Argenteuil by Claude Monet 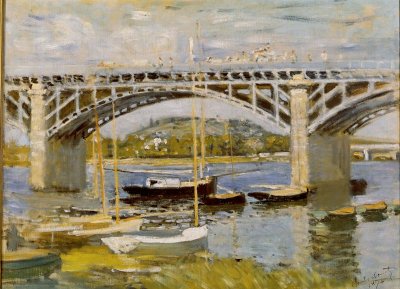 Claude Monet's Bridge at Argenteuil (23-5/8x31-1/2 inches) is an oil-on-canvas work house at the Neue Pinakothek in Munich, Germany.

Claude Monet painted Bridge at Argenteuil in 1874. The old road bridge in Argenteuil was destroyed during the Franco-Prussian War. It was replaced by a modern structure of cast iron, limestone rubble, and concrete, announcing, along with the railway, that the little village was in transition.

Although Monet lamented the changes that increased industry and population brought to Argenteuil, he did not romanticize the modern aspects of the setting. He embraced these features in his art as characteristic of the region as well as his time.In the last section, see Claude Monet's The Studio Boat for a look at the artist's floating studio.