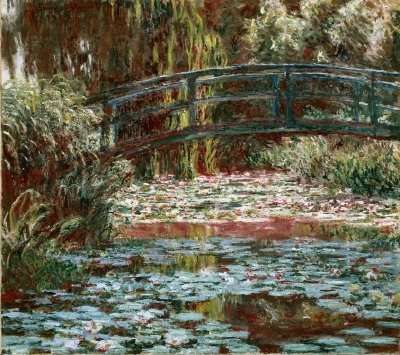 Claude Monet's Water Lily Pool is an oil on canvas (35-3/8x39-3/8 inches) in the Mr. and Mrs. Lewis Larned Coburn Memorial Collection at The Art Institute of Chicago.

Water Lily Pool was painted by Claude Monet in 1900. At the end of the summer, he added six more paintings to his series. They were exhibited at Durand-Ruel's gallery in Paris that November.

Some critics gave these Monet works lukewarm reviews, comparing the images to Japanese prints that featured the characteristic arched footbridge. Others questioned why Monet had chosen such a narrow subject. But art critic Julien Leclerq possessed the foresight to suggest that the paintings represented an unfolding idea that people would understand more over time.

A few years later, Claude Monet would create another short series of more expressive water garden paintings. See the different vantage point he took in Waterlily Pond in the next section.