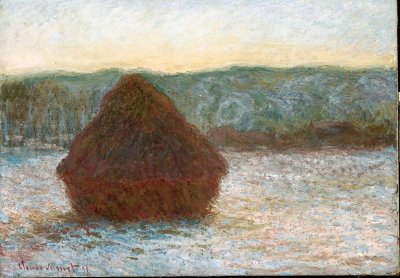 Stack of Wheat (Thaw, Sunset) was part of a series of paintings in which Claude Monet featured stacks of wheat.

Letters to Alice during Claude Monet's journeys reveal that he missed her, his house, and his family, and, as the decade drew to a close, he increasingly sought subjects closer to home. He painted the meadows and the fields of wild irises that grew near his house in Giverny, and Alice's daughters posed for him outdoors under natural light.

In 1888, noticing that the local farmers stored their wheat in large rounded stacks in the cleared fields, Monet set up his easel and began to observe the action of the sun on the hill-like grain stacks at different times of the day. Over the course of the next two years, he returned to the same location each season and -- equipped with several canvases -- switched from one to another as the light changed. In a letter to friend and writer Gustave Geffroy, Monet admitted that he sought to render the impossible -- the instant and ever-changing effect of light on the "envelope" of form.

By the end of 1890, Claude Monet had completed 30 canvases, and, in his first great series, he expressed the fullest range of his observations of the seasonal cycles of nature as shifting color on simple stacks of wheat.

In 1891, he turned his attention to a stand of poplars along the Epte river, painting 24 canvases, and, in 1892 and 1893, he produced 30 views of the facade of Rouen Cathedral, working on as many as a dozen canvases a day.

Confident of the increased prosperity ensured by his now successful career, Monet purchased his home in Giverny in 1890. Alice's estranged husband, Hoschede, died the following spring, and, on July 16, 1892, Alice and Monet were wed. Early the next year, Monet bought a small parcel of land adjacent to his house and developed plans to turn its small pond into a water garden.

Over the years, Monet had become a passionate gardener, and he had transformed the large traditional garden in front of his house into colorful beds of bright blossoms that one visitor described as "floral fireworks." Now he wanted to enhance the natural reeds, irises, and willows that grew in the marshy soil around the little pond where he hoped to cultivate water lilies. After a struggle with the local council, who feared the aquatic plants would poison the region's waters, Monet hired a crew of workers to modify the perimeter of the pond with additional reeds, lilies, and irises as well as Japanese peonies and bamboo.

His design reflected his longstanding admiration for Japanese art, and, in 1895, Monet had a small arched footbridge built to span the pond, an idea he adapted from Ando Hiroshige's esteemed print series One Hundred Famous Views of Edo. After several false starts, he produced his first series of water garden paintings, which consisted of 18 views of the Japanese bridge.

Although he made three trips to London to paint during the years 1899 to 1901, Monet's fascination for his water garden only increased. In 1901, he expanded the garden and, for the next seven years, spent his summers under the shelter of an umbrella, painting at the edge of his pond. He described his motif as "the mirror of water, whose appearance changes at every instant." In observing the glassy surface, Monet saw a fleeting spectacle of reflections: a patch of sky, a branch of willow, a cloud passing overhead.

As the years passed, his paintings became increasingly daring; he eliminated the horizon and the mooring perimeter of the pond, allowing his subject to float on the canvas like the lilies on the water. The motion of the water and the random movements of the lilies -- along with the trembling reflections -- gave his art an ethereal quality. The challenge to convey the daily and seasonal change in his art gave way to a more subtle pursuit: expressing the most fugitive effects of light on the water in the static medium of paint on canvas.

Alice worried that Monet was again working to the point of exhaustion, and the painter admitted to his friend Geffroy that he had become obsessed with his subject. Durand-Ruel urged Monet to release a selection of the canvases to exhibit to the public, but Monet refused to do so until the series was completed to his satisfaction. On May 5, 1909, he exhibited 48 works in Durand-Ruel's Paris gallery under the title Les Nympheas: Series des paysages d'eau (The Water Lilies: Landscapes of Water). The critics were astonished, saying the works broke down the boundaries of earth and sky.

Claude Monet's final years were spent working on grand, large-scale works. Continue to the next page to learn about the end of Monet's life.