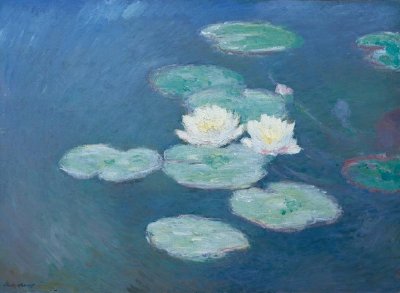 Later in his life, Monet developed a consuming obsession with Water Lilies.

By the end of the year, Monet again found himself in dire financial straits. Hoschede went bankrupt and sold off his art collection at bargain prices. In March 1878, Camille gave birth to Monet's second son, Michel, but her health began to deteriorate. Near the end of the summer, to save money, Monet moved his household to the smaller and more remote village Vetheuil, 40 miles north of Paris along the Seine. As a favor, he allowed Hoschede, his wife, and their six children to move in as well, further crowding the small house and straining the limited budget.

Hoping to attract new patrons, Monet submitted 29 works to the fourth Impressionist exhibition in the spring of 1879, but sales were meager. Then, in September, Camille died of cancer. Near the end of the year, Hoschede returned to Paris to try to recover his losses, but his wife, Alice, chose to remain with Monet, and they raised their eight children together as a family.

Feeling the increasing need to advance his career, Monet once again presented his work to the Salon jury. The Seine at Lavacourt (1880), a shimmering river scene, was accepted for the Salon of 1880, and Monet declined to participate in the fifth Impressionist exhibition. In 1881, he submitted to neither Salon nor the sixth Impressionist exhibition, preferring to concentrate on advancing his work.

By the end of 1881, Monet could no longer afford the house in Vetheuil. He moved his family to Poissy, a crowded industrial suburb on the western outskirts of Paris. He cut his budget to the bone and, with nothing in Poissy to stir his imagination, took regular journeys out to the Normandy coast to paint. In 1882, he drew critical acclaim for his 35 works shown in the seventh Impressionist exhibition. In the journal La Vie Moderne, critic Armand Silvestre declared Monet the most exquisite of the Impressionists and a true poet of nature.

In the following spring the lease on the house in Poissy was ready to expire, and again Monet went in search of an affordable residence. Recalling that there were many attractive hamlets along the train line from Paris to Le Havre, Monet scouted the countryside along the Epte River, a tributary of the Seine. Forty-five miles northwest of Paris, he discovered the little village of Giverny. The natural features of the region were beautiful and varied, with rolling hills to the north and marshlands to the south.

The village was nearly untouched by industry, and, with its narrow streets and cottage gardens -- and less than 300 residents -- Giverny appeared to be a rural paradise. Monet found a large two-story house on two and a half acres of land. Within the walls of the property were several outbuildings, an orchard, and a neglected garden. He signed a lease and, in May 1883, moved his family there from Poissy. With relentless energy, Monet immersed himself in his work. The decade proved a restless one for the painter, during which he faced the challenge of new demands and new desires. He decided to end his participation in the Impressionist exhibitions as well as end his submission to the scrutiny of Salon. But, in middle age with an extensive family -- as well as a love for good food, fine wine, and elegant clothes -- Monet needed to raise his professional profile.

He mounted his first solo exhibition in February 1883 in Durand-Ruel's gallery, and he also began to negotiate with other dealers, such as Georges Petit and Theo van Gogh (brother of Vincent van Gogh), who could promote his work to an international audience. In April 1886, Monet made his American debut, dominating the exhibition of Impressionism organized by Durand-Ruel in New York City with 49 works. As a result, American collectors regarded Monet as the foremost Impressionist painter

Monet applied the same fierce determination to advance his art, constantly searching for new subjects and a deeper comprehension of visual phenomena in the natural world. Every winter he traveled to the Channel coast to paint the rocky shores at Pourville and Etretat. He countered the harsh weather conditions and cold gray tones of the Channel seas with several trips to Bordighera, Italy, and the port of Antibes, France, where the bright flowers, sand, and seas, observed under a blinding sun, warmed his palette.

Monet journeyed to Brittany, France, to paint the jagged rock formations off the coast of Belle-Isle, writing to Alice that under the dark and threatening sky he struggled to find the tones to express the tragic and sinister qualities of the place. He pushed himself to the point of exhaustion, working in every type of weather to capture his elusive subject -- the volatile perception of atmosphere and illumination expressed in color that changed constantly before his eyes.

Among Monet's best-known works are his series featuring water lilies and haystacks. On the next page, learn about some of those masterpieces.