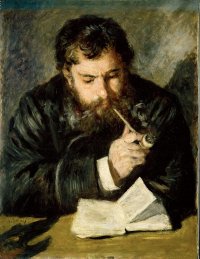 Auguste Renoir painted this portrait of Claude Monet in 1872, when Monet was 32.

To his own generation -- and to every generation since -- Claude Monet (1840-1926) embodied the spirit of the artistic revolution known as Impressionism. He was at the forefront when a small group of young artists, dissatisfied with the conservative standards of the jury that selected the works of art each year for the official Salon art exhibition in Paris, decided to mount their own exhibition.

Monet helped formulate the group's mission of promoting art that was individualistic in style and expression as well as modern in content. And, when their first exhibition opened to the public, it was one of Monet's works, Impression Sunrise (1872), that became the critical flash point of the exhibition, prompting critics to dismiss the unorthodox vision of the artists as nothing more than mere impressions. The group turned derision into daring and, calling themselves the "Impressionists," continued to showcase pioneering works for more than a decade.

Monet often dominated these displays, and the spontaneous and suggestive quality of his style -- achieved with the direct observation of his subjects in natural light, sparkling color, and deft brush work -- became the hallmark of the Impressionist aesthetic.

Although Monet played an essential role in the history of Impressionism, he defined his connection with the Impressionist circle as a brief interlude in his long and productive career. He participated in only five of the eight Impressionist exhibitions, and he confessed he was not happy about being responsible for the term used to describe the group. Monet had formulated the objectives of his art before the group's endeavors, and, more than any other artist in the circle, he remained true to his goal of translating his observations of the light, color, and atmosphere of the natural world into the pure expression of paint on canvas.

For Monet, painting became the means to express a lifetime's experience of visual sensation, and he perceived his art as the result of his relationship with nature, saying, "All I did was to look at what the universe showed me, to let my brush bear witness to it." 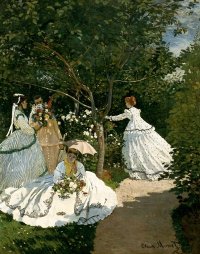 Monet's Women in the Garden at Ville d'Avray was hailed by some as a new kind of art.

The Birth of an Artist

Born in Paris on November 14, 1840, Claude Oscar Monet spent his childhood in the coastal city of Le Havre, where his father worked for the family grocery business. As a disinterested student, young Monet covered his notebooks with drawings, but none of these works survived. By 1857, a Le Havre art dealer confirmed the adolescent's talent by regularly displaying Monet's caricatures of noted personalities in his shop window. The dealer also represented the marine painter Eugene Boudin, and it was under the influence of the older artist that Monet purchased his first box of paints and attempted to capture the light and color of nature by working outdoors. Within two years, Monet decided to move to Paris to pursue a career as an artist.

Monet arrived in the capital city in May 1859 while the annual Salon was on display. His letters reveal that he admired the most radical trends in art: the naturalism of Constant Troyon, Camille Corot, and Charles-Francois Daubigny -- painters associated with the Barbizon region who pioneered plein air (outdoor) painting -- and the realism of Gustave Courbet and Edouard Manet, whose modern-life subjects challenged traditional art conventions. Monet enrolled in the Academie Suisse, a freethinking studio with an unstructured curriculum, but, in 1861, he was drafted into military service.

While stationed in Algeria, Monet contracted typhoid fever and was granted a furlough to recover in August 1862. His aunt then paid to have him released from the remaining years of his service, and, with her support, he returned to Paris to enroll in the studio of Charles Gleyre. A well-respected academic painter, Gleyre offered conventional training to prepare young artists for competition in Salon. But, in the company of like-minded students such as Alfred Sisley, Frederic Bazille, and Pierre-Auguste Renoir, Monet gained more from sketching trips to the countryside and soon left the studio.

Monet made his debut at Salon in 1865 as a marine painter in the style of Boudin, exhibiting Mouth of the Seine at Honfleur (1865). But his interest quickly shifted to scenes of contemporary life. Inspired by the works of Manet, such as Music in the Tuileries Gardens (1862), Monet attempted several compositions of fashionable young Parisians enjoying themselves outdoors.

With his friends and his future wife, Camille Donicieux (1847-79), as his models, Monet observed his figures in natural light and worked on the grand-scale canvases that Salon painters used for mythical and historical subjects. Some critics mocked Monet's ambitions, but writer Emile Zola saw the spirit of modern life in Women at the Garden at Ville d'Avray (1866-67), which had been rejected for Salon. While he admired Monet's seascapes, Zola urged him to continue to portray modern life with his "exact and candid eye."

Learn more about Claude Monet's life and his early Impressionist paintings in the next section.