Browse the article How Art Works 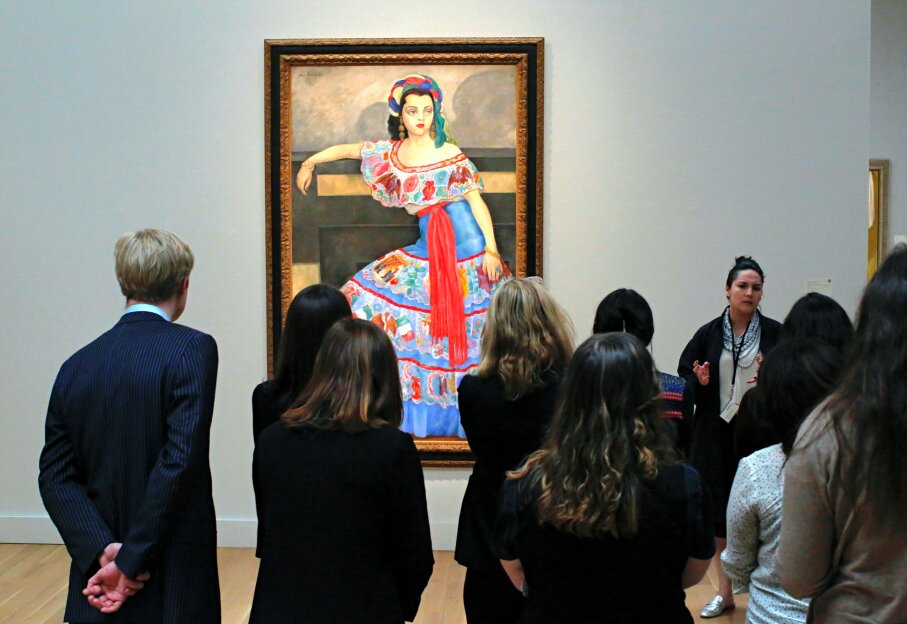 A group of people observe a painting by Mexican Artist Diego Rivera before Latin American Art auction at Sothebys on May 24, 2017 in New York. Kena Betancur/AFP/Getty Images

­We­ see art all around us in our daily lives, and we also hear about it frequently in the news. But have you ever thought about it? What, exactly, is art? Since people have been asking this question (and arguing over it) for hundreds of years, it may not be possi­ble to define as precisely as we could define concepts like "hairbrush," "balloon," etc. However, art is surprisingly­ consistent across mediums and through the centuries, and if you think about it it is possible to come up with a very revealing definition.

art n - The conscious use of skill and creative imagination esp. in the production of aesthetic objects; also: works so produced b (1): fine arts (2): one of the fine arts (3): a graphic art

­Art literally means effort, or attempt, so we have words like artful, artisan, artistic, etc. All of these imply that in some way, humans have intended or planned something. Most dictionary definitions of art, like this one, involve words like production, expression, arrangement and effort. That means that there is a difference between a rock we happen to sit on and a rock we have dragged out of the woods and arranged in our garden with four other rocks, to make a circle of seats. The latter is a kind of art because we have chosen materials and assembled them in a way not merely useful but also somehow satisfying to us, the artists. So in many ways, art has as much to do with the artist's intentions as with the art itself.

­A ­big part of art is intention. Art is art when it is declared as such. At the San Francisco Museum of Modern Art there was once a display of stuffed animals covered in mud. Many children happen to create stuffed animals covered in mud in their backyards all the time. The difference between mud-daubed toys in a San Francisco museum and dirty stuffed animals in your backyard comes down, essentially, to intent and effort. The creator of the San Francisco exhibit intended the work as an artistic expression (we hope). Grimy toys in the backyard, on the other hand, are usually just a by-product of lots of playing. Unless your child intended to create a work of art, grubby stuffed animals are just a mess. On the other hand, if your child was intending an expressive statement of some kind, we are faced with an unhappy fact of the artistic life -- i.e., that the public does not always appreciate one's work. A practical element of art is public recognition.

Art probably began as a form of communication or record-keeping. Archaeologists and anthropologists have speculated that the early cave paintings found throughout the world are records of tribal hunts or hunting seasons, because of the proliferation of repeated animal figures. Later, such figures probably took on a symbolic importance. Just as you or I might find that pleasant things happened each time we wore a certain shirt, and take to thinking of that shirt as "lucky," so too early people may have associated animals, plants and people with good and bad luck, seasonal changes like floods or snow, successful hunting and other things important to hunting and gathering lifestyles. So eventually, we see artifacts discovered which show an attempt at more than just record-keeping -- carved figures of women, for example, or small animal figurines. Even utilitarian objects like knives and arrowheads begin to show some attempts at craftsmanship in the elaborate way the edges were chipped and feathered to a point. The implication is that early craftsmen became interested not just in the usefulness of an item, but also in its appearance.

This trend continued throughout many ancient civilizations, and no doubt images of ancient Egyptian mummy cases, Greek statues, Byzantine mosaics and Buddhist reliefs leap to mind when we think about ancient art. Much early art was religious, perhaps because religion provided an index of easily referenced symbols which could be mass-produced -- perhaps because at those early stages, when much art was primarily symbolic, religion was an easier topic than any other.

Whatever the reason, in many cultures we see the growth of secular art coinciding with the growth of a new kind of art, one which focuses on people and everyday events rather than idealized spiritual and mythical figures. Portraits, classical busts, and monuments begin to make their appearance. Of course, in many cases, there was still overlap between secular and religious themes -- so rulers of a kingdom were sculpted dressed as Zeus or Poseidon, or Indian reliefs of women look very much like Indian reliefs of goddesses. This trend continued up to the end of the nineteenth-century, in fact, when people were still painting Biblical or mythological scenes with real people as the subjects of the paintings.

Along with secular art came the development of decorative art, which can range from things as large as architecture or formal landscaping, to items as small as a hand-painted tile or a trained topiary. However, in all of these things there is a visible effort to create and mold imaginatively rather than for utilitarian purposes. 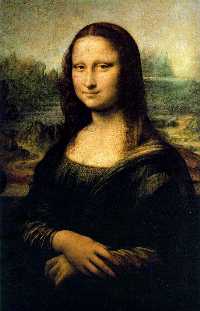 "You see it every day, but what, exactly, is art? Learn about art and explore the huge collection of art now becoming available on the Web!"

Today, art has become a very complex issue indeed. All along there have been debates over the nature and purpose of art that were essentially unresolvable. After all, if someone says "The Mona Lisa is art because it's beautiful," and another person says, "The Mona Lisa is not art, because it's not beautiful," it is difficult to come to a conclusion. Other debates raged over whether art should be "dulce et utile" -- that is, should have a didactic purpose -- or should simply be a means of pleasing the senses and creating and celebrating beautiful objects: "art pour l'art," or "art for art's sake." Today, many people say that art does not have to be beautiful -- in essence, saying that "The Mona Lisa is not beautiful, but is art." The natural response is "How do you know?"

These kinds of debates render the topic still more difficult, especially when we are faced with various types of modern art. Is a blank canvas art? Is a porcelain toilet standing alone in a gallery art? Is a collection of crushed aluminum cans arranged in a wire wastebasket art? Ultimately, we can only agree that those items, involving effort and arrangement as they do, are art, but that we are unable to define whether or not they are fine art, or high art (which is perhaps what people have been arguing about all along).

The same of course goes for music, literature, dance, and other kinds of arts, although they have not been the subject of quite as much philosophical debate as the visual arts (with the possible exception of literature). Approaching us is the question of how to classify all the television and film that surrounds us. What kind of standards will we set up to define art among them?

However, art has undoubtedly been a means of stimulating imagination and creativity for centuries, and has been intended as such, whether it is religious, secular, painting, sculpture, decorative or representative. Perhaps the best way then to define art is as created work which is calculated for some kind of effect, whether in the public's eye or the artist's own. We can say that often it is designed to please and delight. Often it has a symbolic meaning buried within it. But there are so many exceptions that there truly is no hard and fast rule for art. The bottom line is that if you decided as a child to do your finger-painting on the wall of your bedroom, unless you had extremely open-minded parents, what you did was not art. If as an adult you create the same work and declare it to be art, then it is. Whether anyone else will appreciate your art is another matter.

Here are a variety of art-related links to get you started learning more about art on the web!

Julie Dawson is a writer currently living in Charlottesville, Virginia. She attended Davidson College in North Carolina, and recently received her Master's in English at the University of Virginia. Along with, naturally, an interest in literature, she enjoys the visual and performing arts, outdoor sports, playing with her cat and her new puppy, and fiddling about reading and writing when she could be cleaning her house or balancing her checkbook.