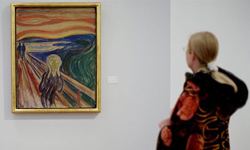 "The Scream" has inspired other crimes, if in a roundabout way. After the 1996 slasher flick "Scream," in which the villians wear cloaks and masks to resemble Munch's subject, a Belgian man wearing a replica costume killed a young girl.
AP Photo/Scanpix/Stian Lysberg Solum

They arrived with a .357-caliber Magnum pistol in hand and left with a pair of a great Norwegian artist's masterpieces. But the thieves who yanked Edvard Munch's "The Scream" and "Madonna" off the walls of the Munch Museum in Norway had to ask where to go to find what was on their list. As nobody argued with their self-checkout firepower, they were pointed to the paintings and left the museum with an estimated $19-million haul [source: BBC].

Oddly, the two paintings spent about a month hidden in a racing tour bus. Thomas Nataas, a European drag racer, lives in the bus during race tours. An acquaintance asked him if he could store something on the bus, and although Nataas refused at first, under duress he agreed to secret away the two celebrated works. Later, the thieves transferred the paintings to another vehicle [source: Jones].

Iver Stensrud, a veteran detective leading the Munch investigation, believed the museum heist was organized to draw attention away from another robbery investigation, one that had led to the death of a senior police officer. In 2006, shortly after a conviction was made for this other robbery, the police received a tip. "The Scream" and "Madonna" were found, slightly damaged but intact, in the back of a van.

The series of robberies discussed on the next page don't fall strictly under the definition of heists, but they constitute by far the largest theft of artworks in the past century.