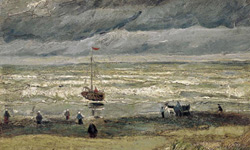 The 1882 painting "View of the Sea at Scheveningen" was one of two works stolen from the Van Gogh Museum in Amsterdam.
Getty Images

On the morning of Dec. 7, 2002, two men, one of whom was an international art thief known as "The Monkey" for his ability to elude police, climbed a ladder to access a window of the VanGogh Museum in Amsterdam. Although they did wear hats to disguise themselves, the thieves used little more than agility to steal two famous works.

In plain view of a busy park, they climbed the ladder to a window, broke the glass with their towel-wrapped elbows and, after only a few minutes, exited by sliding down a rope. They took with them "View of the Sea at Scheveningen" and "Congregation Leaving the Reformed Church at Nuenen," which are worth about $10 million apiece.

"The Monkey," Dutch-born Octave Durham, lived up to his nickname. Although the two thieves were caught on the museum's security cameras, they avoided capture for two years. In 2004, police arrested Durham in Spain and his accomplice in Amsterdam, and later convicted them using DNA evidence from the hats found at the scene.

Neither painting has been recovered, and experts wonder whether the culprits behind the heist are smart enough to take advantage of an outdated Dutch law granting art thieves ownership of stolen items 20 or 30 years after the crime [source: Bell].

On the next page, learn about a $19-million heist that may have only been a cover-up for another crime.