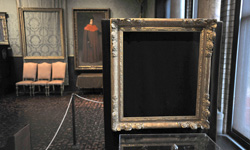 Frames at Boston's Isabella Stewart Gardner Museum that once held paintings by Rembrandt and Vermeer have been empty since 1990, when thieves committed history's largest art heist. The crime remains unsolved, and 13 works of art are still missing.
AP Photo/Josh Reynolds

With the help of goofy fake mustaches, two men managed to steal between $200 million and $300 million in paintings from Boston's Isabella Gardner Museum. At around 1:30 a.m. on March 18, 1990, thieves knocked on the museum's door. The museum guards on duty looked out and saw what appeared to be two police officers -- both with big black mustaches that they would later recall as being laughable. The mustached officers said they were there to check out a reported disturbance. The guards let them in to look around.

Within minutes, the guards found themselves bound, and the thieves spent the next hour or so gathering three Rembrandts, five Degas sketches, a Vermeer, a Manet and a bronze eagle that topped a framed Napoleon-era banner. An alarm went off while they were tearing one of the Rembrandts from its frame, but they located the source and smashed it silent. The police never showed up because it was simply an internal alarm meant to tell guards when people were getting too close to the art [source: Kurkjian]. Finally, the thieves told the guards that the museum would be "hearing from" them, presumably with a ransom demand, and loaded their getaway car in two trips [source: Bell].

But the museum never received a ransom demand. As of 2012, the thieves are still at large, none of the works have been recovered and the FBI continues to investigate the crime. The district attorney of Boston has even promised not to prosecute whoever returns the works [source: Kurkjian]. The museum has offered a $5 million reward [source: Associated Press]. On March 18, 2013, the FBI announced major developments in the case, including identification of the perpetrators, and launched a public campaign to search for information about the missing artwork.