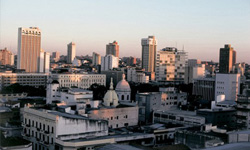 In July 2002, Paraguay hosted the most valuable art exhibition in its history. Then a group of criminals broke in and stole five paintings.

As it turns out, the break-in had been in the making for months. An unidentified man rented a store 80 feet (25 meters) from the National Fine Arts Museum in Asuncion. Authorities believe he then recruited people to help him dig a tunnel 10 feet (3 meters) underground, running from the shop to the museum. After the presumed two months it took to complete the tunnel, the thieves used it to enter the museum undetected on July 30, 2002.

The thieves left with more than a million dollars' worth of art. The stolen works included "Self Portrait" by Esteban Murillo, "The Virgin Mary and Jesus" by Gustave Coubert and Adolphe Piot's "Landscape." As of early 2012, the paintings were still missing [source: Associated Press].

The next heist on our list has an equally impressive plan but a happier ending.