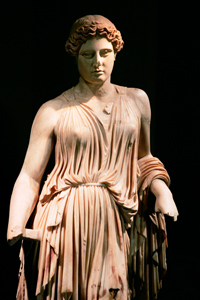 A statue of Hera from Pompeii was part of a traveling exhibit at the Field Museum in Chicago, Ill. The exhibit featured more than 450 artifacts from Pompeii and the nearby communities of Heraculaneum, Oplontis, Boscoreale, and Terzigno.
Scott Olson/Getty Images

­The popular zeal for antiques, or antiquities, arose from the excavations of Pompeii (began in 1748) and Herculaneum (began in 1709). When Mount Vesuvius erupted in 79 A.D., volcanic deposits buried the two cities. The covering of ash, debris and hardened lava ranged from 19-23 feet (6-7 meters) in Pompeii and up to 65 feet (20 meters) in Herculaneum. As a result, the cities were perfectly preserved and protected from looters. In 1738, Charles III of Spain ordered an extension of the first Austrian-led excavation of Herculaneum. Work expanded to include Pompeii in 1748. The treasures uncovered from the ruins sparked the neoclassical movement. Eighteenth-century designers recreated the spirit and style of the ancient cities in architecture and home furnishings.

American antiques found favor with collectors in 1876. The Centennial Exposition in Philadelphia showcased American achievements in archit­ecture and engineering as well as artifacts from its humble colonial beginnings. As U.S. citizens celebrated 100 years of independence from the English Crown, they decided that their own heritage was worth preserving. Antiques became so popular that manufacturers started turning out reproductions of the "early American" styles of Queen Anne, Chippendale (1750-1780), Hepplewhite (1790-1815), Sheraton (1790-1815) and Duncan Phyfe (1815-1840).

But those reproductions don't hold a candle to the real thing. If your antique is authentic, it could be quite valuable. Ultimately, the buyer decides the price at which an antique will sell, but there are some standard factors that determine the price or value of individual pieces.

The first is the original quality of the item. If an antique was originally well-constructed with high-quality materials and excellent craftsmanship and design, it will still have high value today. Furniture that was made poorly when it was new won't gain value just because it reaches 100 years of age.

Antiques dealers and auctioneers also look at the age, rarity and current condition of the article. Period originals are more highly valued than well-crafted antique reproductions. Pieces in good condition with original finishes are preferred to those that have been restored, repaired or refinished. Other factors in determining the asking price include previous sales of similar antiques and the provenance of particular items.

But how can you tell if you have a reproduction or if you're sitting pretty on the real thing? On the next page, we'll give you some pointers to spot the fakes.