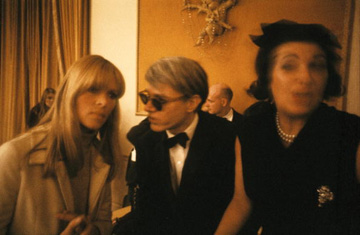 Artist Andy Warhol (center) chats with Nico of The Velvet Underground at a dinner for the New York Society of Clinical Psychiatry in January 1966.
Adam Ritchie/Getty Images

Simply put, Andy Warhol is one of most influential artists of the 20th century. He's the most famous of the so-called Pop artists who emerged from the 1960's New York City counterculture. Throughout a prolific creative career that spanned drawing, painting, printmaking, film, music and video, Warhol left an indelible impression on American culture and modern art.

A recurring theme throughout Warhol's work is the transformation of the mundane and commonplace into art [source: Osterwold]. His most enduring images are silk-screened reproductions of Campbell's soup cans and repetitive, brightly colored "portraits" -- direct copies of film stills and publicity photographs -- of pop culture icons like Marilyn Monroe and Elvis Presley.

Art and film critics have filled volumes with theories about the motivation and meaning of Warhol's work, but the artist himself was famously opaque. He was quick to downplay even his most influential works of art as meaningless and to portray himself as a simple "machine" churning out a product [source: Kinsman].

But even through his mask of ironic detachment, it's clear that Warhol was an artistic revolutionary posing as an accidental celebrity. He had a remarkable eye for pop iconography (he invented the very concept) and a prescient ability to read the national psyche. He was a cult of personality who drew in a creative circle that included groundbreaking musicians like Bob Dylan, The Velvet Underground, actors like Dennis Hopper, and a "who's who" of New York's avant-garde art scene.

Keep reading to learn about Warhol's early life and influences and his surprisingly conventional path to unconventionality.

Warhol was born Andrew Warhola on Aug. 6, 1928, in Pittsburgh, Pa. The youngest of three boys, Warhol showed early artistic promise and became the first in the family to attend college, earning a degree in pictorial design from the Carnegie Institute of Technology (now Carnegie Mellon University) in 1949 [source: Andy Warhol Foundation].

After graduation, Warhol took the overnight bus to New York City, where he found consistent work as a commercial illustrator, providing playful sketches for leading fashion magazines like Vogue and Harper's Bazaar, and acting as the art designer for advertisements, album covers, book covers and department store display windows. He even won commendations from the Art Director's Club and the American Institute of Graphic Arts [source: PBS].

Early in his career, he dropped the "a" from his name [source: PBS]. While he was building his professional resume, Warhol also developed personal art projects. In 1961, he placed some of his earliest Pop art canvases (featuring comic book frames) in the display windows at Manhattan department store Bonwit Teller [source: Osterwold].

The window display didn't lead to a gallery exhibition, but Warhol soon found his muse in Campbell's soup cans, an everyday object that epitomized mundane American life. Warhol's repetitive imagery of the soup cans and other common objects blurred the line between art, advertisement, meaning and emptiness. His first gallery show earned him write-ups in Time, Life and Newsweek magazines [source: Warhola.com].

Warhol bought a four-story brownstone in midtown Manhattan and transformed it into his studio and creative incubator. From 1963 through 1968, the East 47th Street building known as The Factory was a whirlwind of creative activity -- experimental film, art and music -- and served as the scene of an extended, drug-fueled party. He made hundreds of 16 mm films featuring his expanding coterie of friends, muses and hangers-on, whom he called the "superstars."

In the mid-1960s, Warhol created his first Pop sculptures of soap and cereal boxes, and launched the traveling multimedia project called Exploding Plastic Inevitable featuring the music of The Velvet Underground. In 1968, Warhol was shot in the chest by Valarie Solanas -- a disturbed writer who had appeared in one of his films -- but he survived the attack [source: PBS].

During the 1970s, Warhol launched Interview magazine and reinvented the idea of the society portrait, doing hundreds of commissioned works for celebrities and politicians. He wrote 10 books and a play -- all dictated into a tape recorder -- and even produced two shows for MTV.

On the next page, we'll take a deeper look at Warhol's artistic legacy. 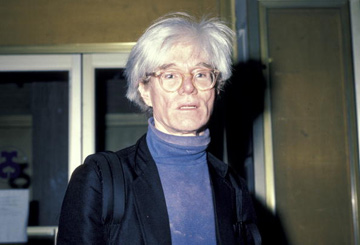 Andy Warhol's 16 mm Auricon camera was one of his most important artist's tools. From 1963, when he first started shooting film, until his death in 1987, Warhol dabbled in every variety of moving image, from epic experimental films to personal portraits to mainstream shows for MTV [source: The Andy Warhol Museum].

Although few of Warhol's films were ever commercially released, a number of them are considered landmarks of avant-garde cinema. His very first film, "Sleeping," was a five-hour fixed camera shot of a man sleeping. Then he made an epic eight-hour movie of the Empire State Building as the New York skyline turned from dusk to dark.

These static early films were much more like paintings than conventional movies. But none of Warhol's work -- even the later films with dialogue and characters -- was remotely conventional. Many were unedited or roughly edited and none had scripted dialogue. Long clips would run out of focus and plot was an afterthought. It's estimated that he made 650 films between 1963 and 1968 alone [source: Whitney].

Some of Warhol's most famous and most visual engaging film works were the hundreds of "screen tests" that he filmed in The Factory from 1964 to 1966. In his studio art, Warhol collected mundane artifacts like soup cans and Brillo boxes and stamped out emotionless reproductions. For the screen tests, Warhol collected people.

Each black-and-white, three-minute, silent screen test featured a Factory regular, celebrity, drag queen, socialite, poet, art collector or complete unknown staring back into the lens [source: Angell]. The result is arresting. The subjects, whether famous or otherwise, try to maintain their poses, giving us no hint of their thoughts or emotional state. They're nothing but their image, a film version of Warhol's rubber stamp society portraits.

Warhol's "actors" were a loosely held group of Factory regulars, including his self-proclaimed "superstars" like Brigid Berlin, International Velvet, Candy Darling, Billy Name, Baby Jane Holzer and his greatest muse, Edie Sedgwick. A 22-year-old heiress from California, Sedgwick was a strikingly beautiful, deeply troubled girl who was the subject of some of Warhol's most influential films like "Poor Little Rich Girl" and "Outer and Inner Space." Sedgwick died of a drug overdose in 1971.

For lots more information about famous artists and artistic movements, see the links on the next page.

How Comic-Con Came to Rule the Pop Culture World
6 Things You Didn't Know About Maya Angelou
Did Shakespeare use real witches' curses in 'Macbeth'?