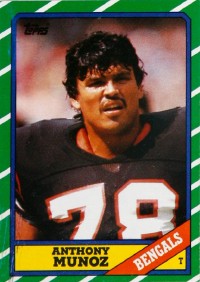 Anthony Munoz was an incredible athlete but was also  known for being an  exceptional role model. See more pictures of football players.

Anthony Munoz was arguably the best offensive tackle to play the game in recent history.

Some, like former Cincinnati Bengals head coach Sam Wyche, go even further. "Anthony is a better person than he was a player," Wyche said. "And he was one of the greatest players of all time. That is what heroes are suppose to look like and act like."

Munoz (born 1958) did everything an offensive lineman should do in superior ways. An exceptional straight-on blocker, he was agile, quick, and strong. In 1987, he played in 11 games and allowed just one and one-half sacks.

His stalwart play was the key to the success that propelled Cincinnati to two Super Bowls during his 13-year career.

"There are no comparisons between him and other tackles," remarked All-Pro defensive end Bruce Smith. "He has proven year after year that he is the best."

Munoz, who earned All-American honors in 1978 and '79 at the University of Southern California, was the Bengals' first-round pick in the 1980 NFL draft.

Some considered the pick a risk because of a knee injury Munoz had sustained in college. But as the celebrated Bengals lineman proved, the concerns were unfounded.

Munoz started 177 of 178 games from 1980-91. Even when his team did poorly, Munoz played with consistent excellence. He set high personal standards and worked tirelessly to achieve them.

A terrific all-around athlete, he even scored four touchdowns during his career on tackle-eligible pass plays.

The recipient of virtually every possible honor, Anthony played in 11 consecutive Pro Bowls and was named NFL Offensive Lineman of the Year by one organization or another in 1981, 1982, and 1985-89.

In 1994, he was selected to the NFL's 75th Anniversary All-Time Team. But perhaps the most fitting of his many honors was being named the recipient of the NFL Man of the Year Award in 1991.

Given to players who excel as role models both on and off the field, the honor couldn't have been bestowed upon a more appropriate person.