The Ant Bully: The Backyard You Never Knew

by Cameron Lawrence
Next 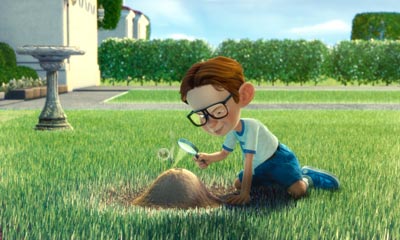 The world of cinema isn’t short on films about bugs and humans shrunk to bug-size. Notable offerings include Pixar's "A Bug's Life" and "Antz," from Dreamworks. But if these themes have hit a saturation point in the film industry, movie-goers don’t seem to mind. That probably has something to do with their intended audience: families with children who are media-saturated themselves and demanding at the box office. The latest offering, "The Ant Bully" comes from DNA Productions, Inc. in Dallas, run by director John A. Davis of "Jimmy Neutron" fame and his wife.

Like "Monster House," another recent animated film, "The Ant Bully" is available for viewing in IMAX 3D, a cutting edge technology in 3D viewing. IMAX 3D makes good on the process our brains use to construct 3D images in everyday life. Our eyes focus on a single focal point, each from its relative position, and the brain works to put these together. To achieve this effect in IMAX 3D, the film is made up of two strips of film, each representing the right or left eye. Both strips of film are then projected one on top of the other. With the IMAX 3D glasses, the viewer is totally immersed in the already-commanding display.

"The Ant Bully" takes us on a journey with Lucas, a 10-year-old recently relocated to a new city. Lucas quickly becomes the punching bag of the bully of his new neighborhood, which ostensibly drives him to vent his frustrations on lesser beings: the ants in his back yard. Little does he know that beneath his feet is a whole civilization and that he's destroying a culture with his garden hose and shoe. When the Wizard Ant Zoc develops a potion to shrink Lucas (or "The Destroyer," as he's known in ant country), the familiar territory of Lucas' backyard becomes an exotic landscape full of danger – monstrous frogs with fatal tongues, and giant, menacing wasps buzzing like enemy warplanes.

In a recent conversation, in the boardroom of his hotel, I asked Davis some questions about making the film.

HSW: Have you ever been an ant bully?

But there seemed to be a fair amount of implied death in the film.

JD: Actually, the ants were annoyed but they were never really killed. [Laughter] But no, it is kind of questionable. Particularly the scenes with the wasps are hitting the ground.

HSW: What first captivated you, or excited you about this story?

JD: I think what really got me was the idea of this civilization under your feet that nobody knows anything about. And bringing that to life, the set pieces – the wasp attack, being eaten by frogs and battling giants. It really appealed to the director side of me and wanted to bring these set pieces to life. One of the touchstones is that usually, as with "Jimmy Neutron," I would kind of go back in my brain and think of things that I connected with when I was a kid and excited me.

HSW: Is that your take on why human beings are so fascinated with ants – just that it's a civilization beneath us and there's an order to it? Do you have any other thoughts on that?

JD: Yeah. One of things I wanted to do was depict the ants as their own culture – they've got their own history and their own beliefs. I started researching aboriginal culture because I wanted to make a tribal society with ties to the earth. So I was thinking about parallels and researching aboriginal culture – there are some odd parallels. For one thing, ants communicate non-verbally over great distances using odors. And aborigines have the ability to communicate over long distances and nobody really knows how they do it. I thought that was really intriguing, so I started drawing other parallels with the body paint.

A weird thing -- because I researched ants quite a bit, too -- since ants live in close quarters, they've evolved a defense mechanism that prevents disease. They have antibiotics that flow over their bodies constantly and somehow the aborigines knew this. When they're in outback and they get cut and have an injury or wound, they'll dig up ants and rub ants into the wound. How did they know that? There are a lot of things that there wasn’t time to flesh out in the movie, but it was fun to try and bring a lot of that to it. Again, just to help the ants have more of a culture or a society. In reality, ants are like little software programs. They do a couple of tasks really, really well, and there is nobody in charge. It's a very alien idea to humans, so I had to had to weigh the needs of the story and make some creative decisions about what was going to be best for the story and emotionally for the characters.

HSW: It was intriguing to see your treatment of religion – the spirituality of the ant colony. Was that from the aboriginal research, too?

JD: I didn't take it directly from it. I did look at that and try to give a sense of it, but more from what the queen is to the ants. So for example, the queen, in reality, is many times bigger than a normal ant. That's why she's huge in the film, because they really are huge. And the idea that she's the mother of all of them means that she's almost like this deity to them, a goddess. She's all-maternal and loving and wise, so her depiction -- I wanted it to be really ethereal and magnificent. And then above that they have beliefs above her. The "Ant Mother," you know, the first one—the mother of all ants. I just wanted to get in the fact that these weren't just a bunch of dumb ants running around. They're a society with all of these beliefs.

Typically, when people see a "primitive" culture, they think, "oh, a bunch of primitives." But philosophically they can be really advanced and have a lot of advanced ideas. It just fell into the whole idea of when Lucas is regarding this as just a stupid ant. But he learns that they're not just a bunch of stupid ants, but they're actually highly-evolved. Just because they don’t have technology doesn’t mean they're not evolved.

HSW: Why was the idea of a sacrificial hero was very important to the film?

JD: For one thing, ants do that. They're the ultimate communists, even though the idea wasn’t to promote communism in the movie. But it’s the idea of a selfless act. That's one of the things Lucas has to learn. That's the reason there's the whole initial wasp attack, it's to set it up so Lucas has to make a choice between saving himself and saving Hova—you know, selfless act or self-preservation. Both kind of have merit, because you want to preserve yourself but it's an interesting question. And it's a question that a first you see he kind of makes a wrong choice, and later he’s able to make a right choice and invest in it. And at that moment he becomes an ant and feels the strength of the colony and gives him the ability to do ant-like behavior.

I struggled with the idea of -- I wanted him to become and ant and be able to do the things he couldn't do earlier in the movie, like he can't go vertical, he can't lift heavy things; and is it going to be a physical change or a mental change? For me it was more important that it be a mental change and then just hoped that the audience would make that leap also. It would have been easier if it was like, "Well, if you drink this, eat this food, you'll become an ant and you'll be strong like us." But then it kind of seemed perfunctory and kind of mechanical as opposed to a change in him. So self-sacrifice became a theme; it became a key to him maturing, something that Hova touches on when she's arguing with Lucas. He [Lucas] says, "Well you look after you and I’ll look after me." And she says, "That’s not the way ants are."

HSW: It's nice to see a family film that strives for that depth.

JD: That's one thing that I get frustrated with a lot of films in general. I think that kids are really, really sharp. When I was a kid, I knew when I was being talked down to and when things were being oversimplified for me. They're [kids] are sharp, they get all of that stuff. I didn't want to sugarcoat it. I think these themes are important and relevant to kids and adults – these ideas of bullying and just because you can do something doesn't mean you should, and the ramifications of your actions and that kind of stuff.