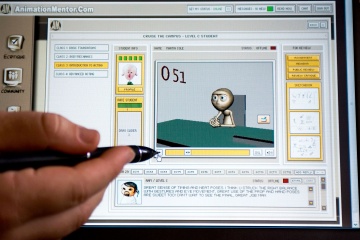 At the end of the day, animation software is simply another tool to express creative ideas.
© Kim Kulish/Corbis

The goal of animation isn't just to move stuff around on a screen. It's usually to tell a story. Whether an animator goes with old-school physical methods or computer software, the work is still all about the narrative.

With enough practice and the right tools, you can animate anything from simple 2-D black-and-white line drawings to stunningly rendered 3-D color graphics. And more and more software packages are becoming viable for home use. Some are free (like Blender), some are now available for a monthly charge (like Adobe Flash) and a lot of others are just a few hundred dollars, although there are packages in the thousands, as well. Thankfully, many animation software companies have multiple versions (from light to professional), and a few let you try out their software for free for a trial period.

Which software you pick should be based on your final goals, your skills, your budget and what your computer can handle. There's a lot of overlap among some of the different animation applications, so there's likely more than one that will do for your purposes. You might even want or need multiple hardware and software tools to handle separate tasks like building your models, creating music and syncing it to your animation, rendering your final animation and editing your video. Or you might find one application that handles all of these adequately for your project.

No matter what, you'll have to block out some time. Your software and hardware processing power, length of the film, type of animation and how many people you have working on it all come into play. Creating animations with software can take anywhere from a few hours for a short and simple 2-D animation in Flash to several years for a full-length computer-generated movie like a Pixar film.

Not that most of us are going to whip out a Pixar film alone, even if we have years to put into it. But as time passes and the graphics magicians come up with better and better algorithms and tools, even the software you can run at home is getting more robust and incorporating more realistic hair, skin, texture and motion effects. Some of them are also getting cheaper and more user-friendly. One day, it may be that our imaginations are the only barriers to creating stunning, professional-level animations.

Researching this article taught me some fascinating stuff about the history of animation software and CGI work and about some of the interesting connections between all the groups at play over the past few decades. It may also have inspired me to get to work on a cartoon. I've made some short, rudimentary animations in Flash, with simple cartoony characters and not-so-lifelike movement, but something more complex might be in order now that I know what other tools are available today (especially the free Blender 3-D software). It is likely to be a slow process with a bit of a learning curve, so making a feature-length film anytime soon is probably out, but I might as well spend my free time doing something with a fun outcome, like making a cartoon. And whether I succeed or fail, I'll also keep watching them.