Differences Between 2-D and 3-D Animation 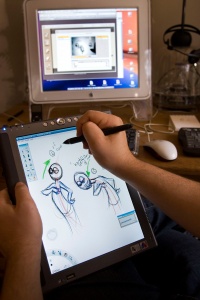 Some software enables animators to draw 2-D images that are then rendered in 3-D.
© Kim Kulish/Corbis

There are a lot of similarities between 2-D and 3-D animation techniques and software. In most cases, both types let you create graphics using similar tools. Both will generally interpolate the frames in between key frames. Both tend to have a timeline that you can add things to and scrub through to see your work in action.

But there are also some notable differences. In 2-D animation software, you're working with flat shapes that follow the plane of your screen. You can only plot things along two axes (the x-axis and y-axis), and your camera is set to one perspective (looking straight at the screen). You can emulate 3-D-like motion by using perspective tricks, like scaling a character down progressively to make him appear to move away from the audience. But if you want to see your objects and characters from different angles, you have to draw or create different views of the characters from all the angles you need.

In 3-D, you gain a third axis — the z-axis. This allows you to create and work with 3-D objects and characters and to move them around in three dimensions (albeit virtual ones). The shape tools will create 3-D objects such as cubes and spheres rather than flat ones like squares and circles. If you want to see a character from different angles, you don't draw multiple versions. You create a fully realized 3-D model of the character, and once it's on your screen, you can rotate and pivot it around as you like. You can also set the camera perspective anywhere and look at your scenes from any vantage point.

Saving out your final movie in a 2-D program is a relatively simple process because you've laid out every frame as-is on the 2-D stage. In 3-D animation software, the program has to render all the 3-D models on screen into 2-D images for each frame from the camera's point of view for that shot. You usually have to set camera and light source information before rendering.

If you want to get really fancy (and high budget), you can use motion capture, and film actors covered in sensors with special cameras. The recorded motion data is imported into the animation software to create a 3-D model with realistic motion. With 2-D, the closest comparable technique is importing video, putting it on a layer and tracing over it to capture the motion frame by frame (a technique called rotoscoping).

There are even some software packages that let you work with both 2-D and 3-D elements together, or zoom around in a three-dimensional environment containing 2-D objects. And a lot of 2-D packages are implementing character rigging with skeletons now, too. They can just be used to control your character's movement and deformation on two axes rather than three.

When creating a stand-alone animation, 2-D versus 3-D may be a choice of style or of budget; you might not be able to afford the time or hardware and software required to render 3-D movies. Animation software that can render 3-D is a necessity when creating graphics to composite into live-action movies, however, and is becoming more and more common for animation of cartoons.