What Animation Software Can and Can't Do 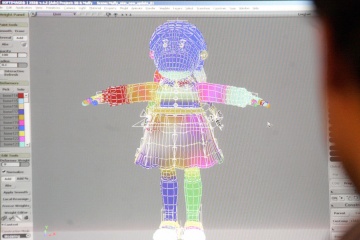 Software can help animators turn their concepts into visible animation, but artists have to learn to use it.
© INDRANIL MUKHERJEE/AFP/Getty Images

Animation software provides you with computerized versions of old tools in addition to some nifty new tools, but it doesn't do the work of the animator. Someone still has to design and create characters, backgrounds and other elements and then carefully arrange them over a series of frames to create a moving picture. Everything is digital instead of physical (a mouse and computer screen instead of pen and paper, for instance), but the methods are very similar, and it's still a lot of work.

Like any activity involving a computer, you have to tell it what to do, but animation software does include some handy time-savers. Anything involving math (including algebra, geometry, trigonometry, calculus and physics) can be represented by algorithms, which can be programmed into software. All of these fields come into play in software's ability to create computer graphics and animation, and they've also been used to build a lot of handy quick tools and automation into the various software packages.

Animation software lets you make nearly instantaneous adjustments to frames you've already modified, something that may have involved physical erasure or starting over with a new animation cel in traditional animation. The applications give you tools to draw or create elements using your input device of choice (mouse, trackpad or pen tablet). Cut, copy and paste features let you quickly rearrange or duplicate objects or parts of objects, again without the physical labor that would have been required in the old days. You can use a selector tool to drag already-created objects to the screen rather than redrawing them. You can click on lines, points or Bezier curves and drag to resize or otherwise modify objects. These functions aren't limited to objects. You can also sometimes cut or copy and paste whole frames to move a scene or create looping motions.

Another handy tool called onion skinning or ghosting allows you to see your objects in the current frame along with the objects at their positions in one or more previous frames to help you visualize how they are going to move from frame to frame. You are basically seeing objects from multiple frames on the screen all at once.

The software can also interpolate (or auto-create) the in-between frames, whereas in the old days, someone had to manually create art for every frame. The lack of the need for physical media also provides you with limitless virtual art supplies, including a vast palette of colors, which frees you up to create anything and everything you can imagine, given enough time. With enough processing power, skilled animators can now create and display fantastic things that wouldn't have been possible in the past, with an increasing level of realism (if realism is the aim).

Some animation applications are easy to jump into after reading or watching a brief tutorial, and others have a steeper learning curve. In any case, practice and study are required to master any application, as well as the art of animation itself in any medium.