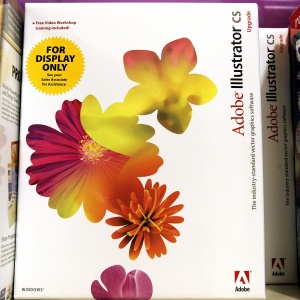 Adobe Illustrator was introduced in 1987. Since then, many versions have been released, including this 2005 offering.
© Tim Boyle/Getty Images

Several programs that let users create computer graphics were released in the 1980s, including Autodesk's AutoCAD in 1983, MacPaint in 1984 and Adobe Illustrator in 1987. Adobe Photoshop was developed in 1988, and version 1.0 was officially released in early 1990. Autodesk even released an animation program called AutoFlix in 1986.

In the 1990s, more animation packages began to hit the market. Autodesk 3-D Studio DOS came out in 1990 and later became 3-D Studio Max, a 3-D animation software full of features that was released in 1996. In 1990, NewTek released Video Toaster, which included LightWave 3-D, for Commodore's Amiga computer. LightWave 3-D was later ported to Mac and Windows. Alias's 1993 software PowerAnimator, used on the breakthrough CG film "Jurassic Park," among others, was eventually combined with two other software applications (Advanced Visualizer and Explore) to become Maya. Maya was released in 1998 by Alias/Wavefront and is now owned by Autodesk. Newer versions of all three are still in use as of 2015. Maya is even used at major effects outfits like Weta Digital, the company that created the CGI for Peter Jackson's "Lord of the Rings" and "Hobbit" films.

Lots more 2-D and 3-D animation software packages are available, including DigiCel's FlipBook, SmithMicro's Anime Studio, Toon Boom's Harmony and Animator, MAXON's Cinema 4D and Blender, the latter of which is a completely free open-source application that can be used for 3-D modeling, animation, rendering and more. You can pick the one that best suits your needs and get to work.