The Skeptics -- Is the jig up? 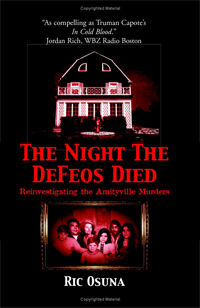 While many have come to regard the supposed supernatural events at 112 Ocean Avenue as fact, many insist that the "haunting" was little more than a clever hoax. There are discrepancies concerning how long the Lutz family remained in the house (the book claims 28 days and neighbors have claimed less than 10 days). And, skeptics claim that the Lutz family abandoned the house due to a failing business and the desire to get out from under a steep mortgage.

As for the claims that supernatural forces led Butch DeFeo to murder his family, it has been brought to light that DeFeo's lawyer, William Weber, persuaded Butch to claim that he heard "voices" in an attempt to plead insanity. At the outset, DeFeo refused to partake in any measure which would put his sanity in question, but apparently agreed after Weber promised him that a lucrative book deal would follow. It was, in fact, a group assembled by William Weber who first approached the Lutz family to discuss writing a book. When the Lutz family, seeking a bigger cut of the profits, ceased dealing with Weber's group and opted to go with author Jay Anson, Weber proclaimed, "I know this book is a hoax. We created this horror story over many bottles of wine."

While this could be taken as the ravings of a bitter ex-partner, perhaps the biggest weapon in the arsenal of the nay-sayers is the true level of involvement and the believability of Father Ralph Pecoraro (known in the novel as Father Mancuso). Many discrepancies exist between what is stated in Anson's book and what George Lutz stated in a civil case against William Weber. (The Lutz family attempted to sue Weber for invasion of privacy after he published articles regarding their experiences.)

In recorded court documents, Father Pecoraro admits that he did not know the Lutz family until after they moved to Amityville and that he, in fact, had not traveled to their home, but instead had only conversed through phone calls. In a letter to author Ric Osuna (The Night the DeFeos Died) in 2002, the Catholic Diocese stated:

"The Diocese maintains that the story was a false report. In November of 1977, Diocesan attorneys prepared a substantial list, to be submitted to the publisher [of The Amityville Horror], of numerous inaccuracies, factually incorrect references and untrue statements regarding events, persons and occurrences that never happened."

Whether or not Father Pecoraro was involved in one of the largest "supernatural" hoaxes of all time or if this is all just a vast cover-up by the Catholic Church, George Lutz maintains to this day that the ghostly events took place. And, as is apparent by the continuing success of anything related to "The Amityville Horror," there are many out there who are ready to believe him.

Special thanks to author Ric Osuna for his assistance with this article. Mr. Osuna maintains the Web site The Amityville Murders and is the author of the book, The Night the DeFeos Died.