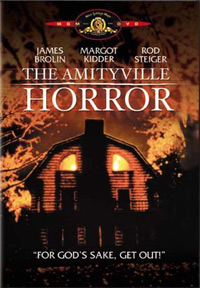 With the success of the book, it didn't take long for Hollywood to take an interest in Amityville. In 1979, James Brolin and Margot Kidder starred as George and Kathy Lutz in the big-screen-production of The Amityville Horror. In spite of rumors that the production team was too scared to work in the real house on 112 Ocean Avenue (in reality, the city refused to issue a permit), the movie piggybacked on the success of the book and went on to make $80 million in its first domestic release. For those keeping score, the flick also spawned three official sequels -- Amityville II: The Possession, Amityville 3-D, and the made-for-TV Amityville IV: The Curse.

More recently, Michael Bay (Armageddon and the Transformers franchise) and his partners at Platinum Dunes (responsible for 2003's Texas Chainsaw Massacre remake) announced their plans to film a remake of the original Amityville Horror for the partnered MGM and Dimension studios. The film stars Ryan Reynolds (Van Wilder) and Melissa George (Dark City, Alias) as George and Kathy Lutz and was directed by Andrew Douglas. Released on April 15th, 2005, it followed Jay Anson's novel more closely and also took account the new facts that have arisen about the famous house in the last 30 years.