The Book that Launched a Thousand Screams 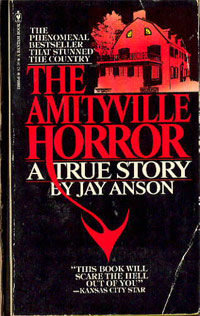 After leaving the house in Amityville, the Lutz family made contact with an author named Jay Anson, who took up the difficult task of documenting and relaying, in written text, what happened during the Lutz's residency. In 1977, Prentice Hall released a book entitled, "The Amityville Horror" and billed it as both "A true story" and "The non-fictional Exorcist." The copyright page of the novel claimed:

The names of several individuals mentioned in this book have been changed to protect their privacy. However, all facts and events, as far as we have been able to verify them, are strictly accurate.

The book chronicled the many unusual happenings that the Lutz family claimed to experience while in Amityville. Their story became a national bestseller that sold more than 3 million copies. As they toured the country and appeared in newspapers and television and radio talk-shows to promote the book, the Lutz family became a household name.