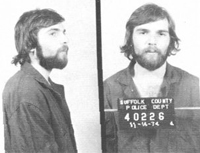 Ronald DeFeo, at the time of his arraignment
Photo courtesy Ric Osuna, The Amityville Murders

On the night of Nov. 13, 1974, 24-year-old Ronald "Butch" DeFeo frantically burst through the door of Henry's Bar in the quiet town of Amityville. Upon Butch's arrival at the small bar, he exclaimed that someone had shot his parents. He persuaded the regulars of the establishment to accompany him back to his residence. ­­On arrival at 112 Ocean Avenue, the bar patrons discovered a grisly scene -- six people, each shot to death,placed stomach-down on their beds with their heads resting on their arms. ­The six people were identified as Ronald DeFeo's:

After hours of interrogation by the Amityville police, Ronald DeFeo dropped his initial story that disgruntled members of the Mafia were responsible for the murders, and admitted to killing his family. While on trial for the slayings, DeFeo claimed that on the night the murders occurred, he heard voices which commanded him to kill. At one point in the trial, DeFeo stated, "Whenever I looked around, there was no one there, so it must have been God talking to me." Eventually, DeFeo was sentenced to six consecutive life sentences in Greenhaven Penitentiary, New York, which he continues to serve.

Think you're an expert on Amityville? Test your knowledge with this quiz from Investigation Discovery: Amityville quiz