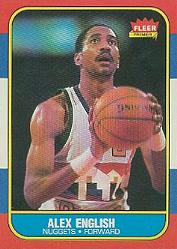 Alex English scored more points in the 1980s than any other player. See more pictures of basketball.

Alex English quietly went about his business while Bird, Magic, Michael, and Detroit's Bad Boys dominated the headlines in the 1980s -- and scored more points in the decade than any other player. When he left the NBA in 1991 after 15 seasons in the league, he stood seventh on the all-time scoring list with 25,613 points.

At 6'7" and barely 190 pounds, English was rail-thin but remarkably durable. During the heart of his career, he missed only 7 games in 10 years and never suffered a major injury. "This skinny body is made for basketball," he said. He had one of the game's unstoppable shots, a quick-release one-hander that he liked to shoot while on the move. He wasn't considered a top defensive player, but otherwise he was well-rounded. In 1985-86, for example, he led the Denver Nuggets in free-throw accuracy and offensive rebounds and was second in assists, all while averaging 29.8 points a game.

English never fit the dumb-jock stereotype. He served as president of the NBA Players Association, published three volumes of poetry, and starred in the 1987 movie Amazing Grace and Chuck. He organized NBA players to aid famine victims in Ethiopia, and he co-chaired the Hands Across America Sports Committee.

Born January 5, 1954, English grew up in Columbia, South Carolina, and attended the University of South Carolina in his hometown. His professional career began slowly; he played two seasons with the Milwaukee Bucks before signing a free-agent contract with the Indiana Pacers in 1978. Traded to Denver in 1980, he found instant gratification in coach Doug Moe's racehorse offense. In 1980-81, English was one of three Nuggets to average more than 20 points a game. In 1982-83, he and Kiki Vandeweghe became the first teammates in 28 years to finish 1-2 in the NBA scoring race. English's average of 28.4 wasn't his career high; he averaged 29.8 in 1985-86 and 28.6 in 1986-87.

In 1990, English jumped to the Dallas Mavericks for one nondescript season, then went to Italy to continue his career. English was the first NBA player to score 2,000 points in eight consecutive seasons. In 2004, he was hired to work with the Toronto Raptors.