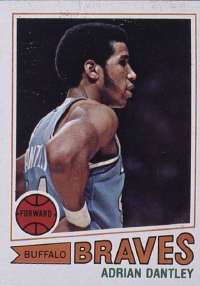 Adrian Dantley had an uncanny feel for getting shots off in traffic. See more pictures of basketball.

Adrian Dantley, one of the greatest scorers of all time, was also a lightning rod for criticism. Much of it was self-induced. Dantley feuded with coaches, haggled over contracts, and spent most of his on-court time looking at the basket. One magazine labeled him "the most selfish player in the NBA," yet the same magazine referred to him as "a tough competitor," "a scoring machine," and "a big-game player who wants the ball in crunch time."

A power plant who measured closer to 6'3" than his listed height of 6'5", Dantley had an uncanny feel for getting shots off in traffic. He toyed with bigger players, using his patented head-and-shoulder fake to create openings to the basket or draw fouls. Nearly a third of his 23,177 NBA points were made at the free-throw line.

A product of basketball-rich Washington, D.C., Dantley (born February 28, 1956) attended DeMatha Catholic High School, one of the nation's leading prep programs. In 1973, he enrolled at Notre Dame, where he was a consensus All-American his sophomore and junior years. His average of 30.4 points during the 1975-76 season placed him second in the nation. At the 1976 Olympics in Montreal, he led the U.S. team in scoring. Skipping his senior season, he joined the Buffalo Braves of the NBA.

Though he was named Rookie of the Year in 1977, Dantley stayed just one season in Buffalo. Three years and three trades later, he landed in Utah, where he averaged at least 26 points a game for seven consecutive seasons and won NBA scoring titles in 1981 (30.7) and 1984 (30.6). His relationship with Jazz coach Frank Layden deteriorated after Dantley held out before the 1984-85 season, and in 1986 he moved to the Detroit Pistons. Dantley scored 34 points against the Los Angeles Lakers in Game 1 of the 1988 NBA Finals but was benched in later games when the Pistons needed rebounding.

Winding up his career, Dantley played briefly with the Dallas Mavericks and the Milwaukee Bucks. He totaled 57 points with the Bucks in 1991, moving him, at the time, past Elgin Baylor into ninth place on the all-time scoring list.