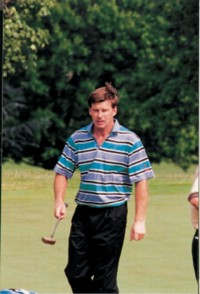 In 1987, Nick Faldo won the British Open ­by shooting par on each hole in the final round. See more pictures of the best golfers.

One day in 1990, Nick Faldo asked Ben Hogan how to win the U.S. Open. Hogan replied, "Shoot the lowest score." Faldo thought the great man was having a joke. He asked the question again. And got the same reply. End of conversation.

Faldo didn't really need to ask. His game was in the Hogan mold, a paragon of consistency derived from solid and well-understood swing fundamentals combined with unassailable concentration as well as an unquenchable thirst for practice.

In fact, the very swing Faldo developed and which brought him to the pinnacle of the game has a certain Hoganesque quality: compact, controlled, and consistent.

If his parents had anything to do about it, Nicholas Alexander Faldo, born in 1957 in Hertfordshire, England, was going to be something special in something.

His mother in particular had various visions of what her only child would become -- an actor, a dancer, a clothing model, a concert pianist. She never had golf in mind, but that was the direction her strong-willed son chose. However, the training of the boy's mind to be very good at whatever he decided to do and be certainly took.

At age 14, after watching Jack Nicklaus play golf on television, Nick Faldo resolved he would give the game a go. A fine natural athlete -- tall, well-built, and strong -- he got the knack for the game quickly.

He became a regular contender in British junior amateur golf, and in 1975 he won the British Youths and English Amateur championships.

That led to a golf scholarship at the University of Houston, a perennial collegiate golf power. But after only 10 weeks on campus, Faldo decided that was not the way to advance his career, and he was in a hurry.

He dropped out, returned home, and in late 1976 turned professional golfer. He was 19 years old.

Faldo had some success early on playing the European PGA Tour, winning 11 tournaments from 1977-84, plus one on the U.S. PGA Tour. However, he discerned that if he was going to go to the very top, he would have to make some major changes in his swing.

Working closely with South African teaching professional David Leadbetter, Faldo completely revamped his technique. It took a full two years to bring the changes up to speed. In 1985 and '86, he won nothing in either Europe or the U.S., where he played periodically.

Then, everything he had been working on fell into place. In 1987, Faldo won the British Open, making 18 pars in the final round to catch and pass a faltering Paul Azinger. Mr. Consistency.

Faldo's star had now com­pletely cleared the horizon, and his accomplishments began to multiply. In 1988, he won twice in Europe and lost in a playoff with Curtis Strange for the U.S. Open.

Then in 1989, he captured his second major title, the Masters, after a playoff with Scott Hoch. He won four other events that year on the European Tour.

In 1990, Faldo again won the Masters, and again in a playoff (with Raymond Floyd), to become only the second successful defender of that much-prized title. That same year, he tied for third in the U.S. Open and then won his second British Open crown.

He won his national championship a third time in 1992.

For all his great success over a 10-year stretch, Faldo became dissatisfied with his game. There were uncharacteristic lapses in his concentration and his shot-making.

They may well have been related to the breakup of his marriage, from which three children were born and which was treated by the scandal-mongering element of the British press with particularly disgusting venom.

In any case, Faldo went back to his drawing board for swing and playing adjustments and decided to play full-time on the U.S. PGA Tour, which he felt was the most competitive in the world.

The decision paid dividends almost immediately. In 1995, he won the Doral-Ryder Open, a mini-major in that it is played on a difficult course and always has one of the strongest competitive fields. Then in 1996, he won his third Masters.

A self-possessed man with an acerbic wit that put off the golf press, yellow and otherwise, Faldo's success has often been questioned.

In making 18 pars to win his first British Open, some speculated he didn't want to win so much as to simply let others falter and hand him the prize.

He won his first Masters when Hoch missed very short putts, his second when Floyd unaccountably pulled a 7-iron approach shot into the water beside the 11th green. In his third Masters victory, Greg Norman handed it over by shooting a final-round 78.

In making 18 straight pars, it wasn't as if he didn't try to make a birdie or two. No putts dropped. Against Hoch, he fired a final-round 65 at Augusta National and won in sudden-death with a birdie.

Against Floyd, Faldo had a last-round 67 to Floyd's 72. Against Norman, Faldo had a brilliant final-round 69 on a course playing as difficult as it ever has. How then might Faldo answer his detractors? He won because he shot the lowest scores.

His back-to-back Masters victories matched Jack Nicklaus as the only two golfers to achieve that feat. (Tiger Woods joined them later.)

His last year on the PGA tour was 2001, although he made sporadic appearances on the European tour afterwards.

Along with his three U.S. Masters, he won three British Open championships, and topped the Official World Golf Ratings for a total of 98 weeks.

Faldo then moved into the broadcasting booth as a lead commentator for the Golf Channel and also worked at ABC. After working there for two years, he was hired in fall 2006 to replace Lanny Wadkins as CBS's primary golf analyst.

What Are the Odds of a Hole-In-One?
What is the history of golf?
Top 10 Putting Tips