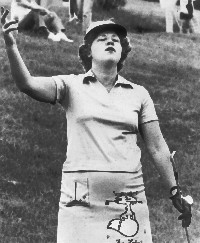 JoAnne Carner is the only player, male or female, who nearly remained a career amateur in the post-World War II era.

Not turning pro until she turned 30, Carner won five U.S. Women's Amateur championships, a total second to only Glenna Collett Vare. She then went on to compile a pro record that placed her in the LPGA Hall of Fame.

Carner, née Gunderson, is the only player to have claimed the U.S. Girls' Junior, Women's Amateur, and Women's Open titles.

She won the junior championship in 1956, also reaching the final of the Women's Amateur that year at age 17.

With prize money rising in the pro game and no worlds left to conquer in amateur golf, Carner decided to turn pro in 1970.

The former "Great Gundy" ea­rned a new nickname on Tour when her fellow pros tabbed her "Big Momma," mainly for her ability to launch the ball long distances.

Carner's gregarious personality and go-for-broke style quickly made her a popular figure in the pro ranks.

Despite an aversion to practice, Carner compiled an impressive record on the Tour, winning the Vare Trophy for low scoring average five times, earning three Player of the Year Awards, and claiming three money titles.

Despite her late start, Carner had a long stay near the top of the LPGA because she achieved more success after age 40 than any player of either sex ever has. Of her 42 LPGA Tour victories, 19 of them came in her 40s, and she led the money list when she was 43 and 44.