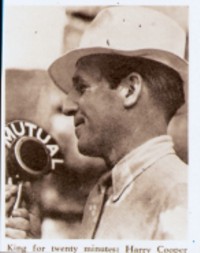 Harry Cooper finished with 31 official PGA Tour victories, but he might be most remembered for his near misses in the game's biggest events.

Indeed, he has the most victories of any player who never won a major championship (and ranks 13th on the all-time win list). Twice he completed his final round as an apparent winner of the U.S. Open, but both times the tournament was snatched away by a later finisher.

Cooper was born in England in 1904, the son of a golf professional, but his family moved to Texas when he was a boy.

He burst into the pro ranks quickly, winning the 1926 Los Angeles Open at the age of 21 and earning the nickname "Lighthorse Harry" because he played so quickly.

He three-putted the 71st hole from eight feet but still would have won outright if Tommy Armour, finishing an hour later, hadn't birdied the 18th hole to force a playoff.

The 18-hole playoff was tied until Cooper took two strokes to escape a bunker and double-bogied the 16th hole.

In 1936, Cooper finished the U.S. Open at Baltusrol with what would have been a record total of 284, despite bogeys on two of the last five holes.

He was congratulated on his victory, but unheralded Tony Manero was in the process of burning up the course on the way to a closing 67 for a winning total of 282.

Cooper led through each of the first three rounds in the 1936 Masters, but he closed with a 76 and finished second to Horton Smith.

He was also the runner-up there in 1938 to Henry Picard. He never advanced past the semifinals of the PGA Championship and never returned to the isle of his birth to play in the British Open.

His second-place finishes notwithstanding, Cooper was one of the finest players of his generation.

His best year was 1937 when he won eight tournaments, led the money list, and won the first Vardon Trophy. He captured the Canadian Open in 1932 and 1937.