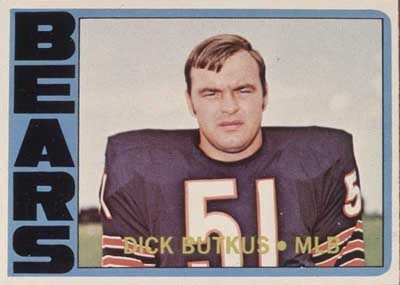 Publications International, Ltd.
Dick Butkus bulldozed through any offensive line as one of the
greatest middle linebackers in the history of football.

While a football team's offense might score all the points, it's the defense that keeps the opponent at a standstill. Great defensive football players like Dick "Night Train" Lane and Bruce Smith were among those who excelled at keeping an offense on its heels.


Great defensive football players such as Turk Edwards suited up in the 1920s and '30s, a time when earning a dollar was harder than making a sack. As great as players like Edwards were, they played in an era when they earned just a few hundred dollars per game.

In the 1970s, football skyrocketed in popularity. It was a decade defined in part by great defensive players like middle linebacker Willie Lanier and safety Ken Houston.

Today, the list of all time great football defenders continues to grow, but the Joe Schmidts and Dick Butkus' remain at the heart of the game's history.

Football will always have outstanding players, but making them great requires a coach's touch. Continue to the next page for a look at great football coaches.