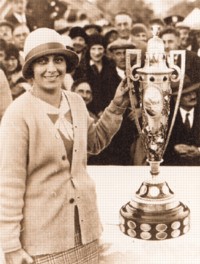 A contemporary of Bobby Jones, Glenna Collett Vare dominated women's amateur golf in the United States much the same way Jones did the men's game.

Her enduring legacy is a record six U.S. Women's Amateur titles -- this in a time when women's professional golf didn't exist. And, like Jones, she was an attractive champion who always conducted herself with class.

Collett was born in 1903 (one year after Jones) and played baseball in her youth before being introduced to golf at age 13 by her mother, who thought it a more appropriate game for a girl.

She came under the wing of Scottish pro Alex Smith, a two-time U.S. Open champion who reputedly said, "If I can't make a champion out of her, I'll be a disgrace to the Smith family."

Vare was perhaps the longest hitter women's golf had ever seen. Asked later how she was able to outdrive her contemporaries, she said, "Very simple. I just hit the ball harder than they did."

Collett won her first Women's Amateur in 1922. After a tough semifinal loss in 1924 (her semifinal opponent's winning putt on the first extra hole bounced off Collett's ball and into the hole), she claimed her second title in 1925.

Collett Vare won the Eastern Amateur and the North and South Amateur six times each, but the one big title she never claimed was the Ladies' British Open Amateur.

She reached the final twice, losing in a memorable match to British great Joyce Wethered in 1929 and falling to relative unknown Diana Fishwick the next year.