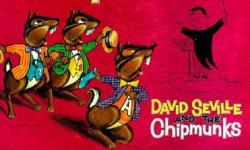 Ross Bagdasarian sped up his own voice electronically to create "The Chipmunks."
Publications International, Ltd.

Reaching the top ten or even the top 40 on the music charts is something that most bands only dream of achieving after years of hard work. But the bands on this list didn't have to agonize over that because they weren't real bands in the first place. Check out these fictional hit makers, but be prepared to get at least one song stuck in your head.

The Chipmunks, a fictitious music group created by Ross Bagdasarian in 1958, consisted of three singing chipmunks: Alvin, the troublemaking frontman; Simon, the intellectual; and Theodore, the sweetheart.

The trio was managed by their human "father," Dave Seville. In reality,Dave Seville was the stage name of Bagdasarian, who electronically sped up his own voice to create the higher-pitched squeaky voices of the chipmunks. This process was so new and innovative that it earned a Grammy for engineering in 1959.

The Chipmunks released a number of albums and singles, with "The Chipmunk Song (Christmas Don't Be Late)" spending four weeks atop the charts in the late 1950s. They have also starred in their own cartoon series and animated films over the years.

Hey, hey . . . were the Monkees a real band or a fake? In 1965, auditions were held for "folk and roll musicians" to play band members on a new TV show called The Monkees. Actors Davy Jones and Micky Dolenz and musicians Mike Nesmith and Peter Tork were chosen as The Monkees. The show won two Emmy Awards in 1967, and the band was so successful that they went on tour -- with the Jimi Hendrix Experience as their opening act!

The Monkees reached the top of the charts three times with hits "I'm a Believer," "Last Train to Clarksville," and "Daydream Believer." Although the show was canceled in 1968 and the band officially broke up in 1970, they have continued to record and tour with some or all of the original members.

Stars of the comic strip Archie and the Saturday morning cartoon The Archie Show, The Archies were a garage band founded in 1968. Band members included Archie, Reggie, Jughead, Betty, and Veronica. Producer Don Kirshner gathered a group of studio musicians to perform the group's songs, the most popular being "Sugar, Sugar," which topped the pop charts in 1969 and was named Billboard magazine's song of the year, the only time a fictional band has ever claimed that honor.

The Archies also reached the top 40 with "Who's Your Baby?," "Bang-Shang-A-Lang," and "Jingle Jangle."

The Partridge Family, a popular television show that aired in the early 1970s, focused on Shirley Partridge (Shirley Jones) and her brood of five children, who suddenly find themselves with a hit song. The show chronicled the family's life on the road performing gigs, as well as their home life.

To promote the show, producers released a series of albums by The Partridge Family. Although the music was originally created by studio musicians with Jones singing backup, David Cassidy, who played eldest son Keith, quickly convinced producers to let him sing lead vocals.

The show and the band became overnight sensations, making Cassidy a teen idol. The group's most popular hits included the show's theme song "C'Mon, Get Happy," "I Woke Up in Love This Morning," and "I Think I Love You," which spent three weeks at number one in late 1970.

The Kids from The Brady Bunch

Marcia, Marcia, Marcia . . . is that you singing? The music group known as The Kids from The Brady Bunch was made up of -- who else -- the young cast members from the mega-popular sitcom that originally aired from 1969 to 1974.

During the show's run, the cast recorded several albums, including Christmas With the Brady Bunch and Meet the Brady Bunch. None of the songs topped the charts, but some fan favorites include, "Sunshine Day," "Time to Change," and "Keep On." All of the kids sang on the albums, and Barry Williams (Greg) and Maureen McCormick (Marcia) both pursued careers in music after the show ended.

Their first album, Briefcase Full of Blues, went double platinum and reached number one on Billboard's album chart. The record produced two top 40 hits with covers of Sam and Dave's "Soul Man" and The Chips' "Rubber Biscuit." The Blues Brothers went on tour, even opening for The Grateful Dead in December 1978. In 1980, Belushi and Aykroyd starred in The Blues Brothers, a feature film that chronicled the life of the fictional duo.

Belushi died in 1982, but The Blues Brothers live on with Jim Belushi (John's brother), John Goodman, and other guests stepping in to fill his shoes.

The Heights, a TV show about a rock 'n' roll band of the same name, aired for only one season in 1992. By day, the characters worked blue-collar jobs, but at night they were The Heights. The series depicted the struggles of the band, as well as the romances among the characters, and a new song was performed each week.

The show's theme song, "How Do You Talk to an Angel," which featured actor Jamie Walters on lead vocals, topped the charts in mid-November. Ironically, the show was canceled a week later.

When your band's name is The Oneders (pronounced The Wonders) and everybody calls you The Oh-nee-ders, it's time to change your name -- even if you're just a fictional band.

That's exactly what happened in the 1996 hit movie That Thing You Do!, written and directed by Tom Hanks. The film about a one-hit wonder band in the 1960s starred Hanks, as well as Tom Everett Scott, Steve Zahn, and Liv Tyler. The band's hit song "That Thing You Do!" went as high as number 18 on Billboard's charts and was nominated for an Oscar for Best Original Song. In addition, the soundtrack reached number 21 on Billboard's album chart.